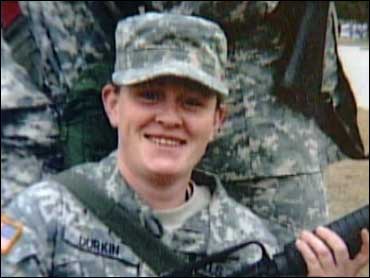 Exactly how Ciara Durkin died remains a mystery. The Army National Guard soldier from Massachusetts was found dead with a gunshot wound to the head in Afghanistan last week, and now her family is demanding answers from the military.

Initially the Pentagon reported that Durkin, part of a finance unit deployed to Afghanistan in November 2006, had been killed in action, but then revised its statement to read she had died of injuries "suffered from a non-combat related incident" at Bagram Airfield. The statement had no specifics and said the circumstances are under investigation.

Durkin had a desk job doing payroll in an office about three miles inside the secure Bagram Air Base. About 90 minutes after she left work last Friday, her family says she was found dead near a chapel on the base with a single gunshot wound to the head.

The 30-year-old soldier, who was born in Ireland and came to the U.S. as a little girl, felt safer deployed in Afghanistan over Iraq, her family told CBS News correspondent Kelly Wallace. Yet she was found dead within a highly secure base, with few answers.

"The family has been informed that she was in the compound, and she was shot in the head," Durkin's sister, Fiona Canavan, told the Boston Globe. "She was in a secure area of the compound, which, even though the investigation is not complete, leads the family to believe it was what is called friendly fire," she said.

Adding to the mystery is something the Army Specialist told her family: if something happened to her in Afghanistan, they should look into it. She was concerned about things she was seeing over there, one of her eight brothers and sisters said in an interview.

Canavan told the Quincy, Mass. Patriot Ledger on Wednesday that when her sister was home three weeks ago, she told her about something she had come across that raised some concern with her: "She was in the finance unit and she said, 'I discovered some things I don't like and I made some enemies because of it.'"

Canavan revealed that Durkin said if anything happened to her, to make sure it was investigated.

"At the time we thought it was said more as a joke," Canavan told the paper.

The family is also wondering whether Durkin's sexual orientation - she was gay - played a role in her death.

"We just want full disclosure, that's all we want - to know what happened to our sister," Diedre Durkin said.

In a letter to Defense Secretary Robert Gates, Kerry said the circumstances need to be uncovered expeditiously and thoroughly.

Durkin's extended family has also asked for help from the Irish Department of Foreign Affairs.

The family doubts suicide, pointing to an upbeat "Happy Birthday" voicemail Durkin left for her brother just hours before she died.

"I thought it was cute at the time," Pierce Durkin said. "Now it's priceless."

The family's grief, made more torturous by the limited information being released and rumors, is not helped by remembrances of past instances where misinformation followed the deaths or injuries of service members.

The military initially said Army Ranger Pat Tillman was killed in an enemy firefight in Afghanistan in 2004, even after evidence came to light that he had been killed by friendly fire.

There were also reports circulated that captured Army pfc. Jessica Lynch had bravely fired upon insurgents after being wounded, though she testified later that that was not so.

Sgt. Patrick McCaffrey and 1st Lt. Andre Tyson, killed in Iraq in 2004, were first reported to have been killed in an insurgent ambush, when they were actually killed by two Iraqi soldiers they were training.