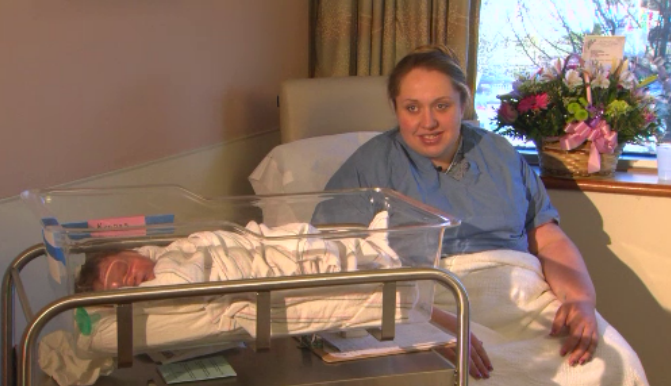 It may seem highly implausible for a woman to go through nine months of pregnancy without realizing she has a baby on the way. Yet experts say it happens more often than most people think. The phenomenon is called cryptic pregnancy or pregnancy denial, and according to one British study it occurs in approximately 1 in 2,500 pregnancies.

Just last week, a woman in Massachusetts visited an emergency room complaining of severe back pain and just over an hour later she was holding her brand new 10-pound baby girl. The new mom, Katie Kropas, said she had no idea she was expecting.

There are a number of factors that may help explain how a woman could have no idea she's with child:

The first impulse for many women who think they're pregnant is to pee on a stick. Home pregnancy tests, available at any drugstore, measure levels of a hormone called hCG (human chorionic gonadotropin) in urine. This hormone -- which supports a woman's reproductive system and is produced by cells that will develop into placenta -- becomes elevated upon conception.

But sometimes home pregnancy tests don't work. Though these tests claim to be as much as 99 percent accurate, false negatives do occur. A woman may use a test too early when her body isn't producing high enough levels of hCG for the test to detect a change. The hormone level begins to rise once the embryo has implanted into the wall of uterus, 7 to 10 days after ovulation, so taking a test too early might deliver a false negative.

There are a wide range of pregnancy tests on the market and all have varying levels of sensitivity. Sometimes, also, a woman's urine may be too diluted, which will result in a lower hormone level concentration.

A woman who is already on the heavy side and carries her extra weight around the middle may not notice if she puts on extra pounds, especially since pregnancy weight gain happens gradually over nine months. In the recent case in Massachusetts, the unwitting new mother said, "I thought I had put on some Christmas season weight, but I never thought I was pregnant. Never."

Some women are lucky enough not to experience any telltale symptoms of pregnancy such as fatigue, morning sickness, headaches, food cravings, back pain and soreness. It some cases, a woman may have less severe symptoms that she mistakes for other health conditions such as a case of food poisoning, stress or indigestion.

"Very often, especially in your first pregnancy, you're really not aware of what you're feeling and we often have women joke and say they're feeling gas pains or they can attribute it to other natural conditions," said Dr. Kim Dever, the chair of Obstetrics and Gynecology at South Shore Hospital in South Weymouth, Massachusetts, where Kropas delivered her surprise baby.

Dever said it's not the first time she's seen a pregnant woman miss all the signs. "We do about 3,500 births a year, and we probably see this a few times a year," she told CBS Boston.

A woman's period typically stops once she's conceived, but some women still continue to experience spotting throughout. It is not usually equal to a full period, but for some expectant moms it may be enough that they don't recognize a sudden difference.

Additionally, not all women have a clockwork-like menstrual cycle. Some may have a cycle that occurs every 40 or 45 days, some women regularly miss periods here and there but are still healthy. In those cases, too, it may be hard to recognize the significance of a change in an already irregular pattern.

A baby that barely moves in the womb

Most babies kick in utero but some do so less than others. Some mothers who are unaware of their pregnancy may have a baby that moves less frequently, which may mean movements are mistaken for digestive conditions.

Some research finds women who are overweight tend to be much farther along in pregnancy before they feel their baby kick. The position of the placenta may also impact whether a mother feels her baby's movements. If the placenta is located on the front wall of a woman's uterus this could provide extra cushioning and may prevent the woman from feeling the pitter-patter of tiny feet.

Being diagnosed with infertility

Though reproductive medicine has made it much easier to predict who will and won't be able to conceive, fertility experts and extensive tests aren't always right. Plenty of women who long ago gave up hope of having a child may suddenly find themselves pregnant. There have been some cases where a woman has actually mistaken her pregnancy symptoms for menopause.

Similarly, tubal ligation and vasectomies, while highly effective, are not 100 percent infallible. A woman who believes she couldn't possibly get pregnant may be slow to recognize she was mistaken.

The effects of stress and denial

The mind is powerful. A woman may be in denial about her pregnancy and ignore or find other explanations for the signs of it. This can occur in women without a history of mental illness, and may be influenced by outside stressors in life such as separation from a partner or financial problems.

Women with mental health problems such as bipolar disorder or schizophrenia may be without the coping skills to address their pregnancy and therefore ignore it. A study published in Hospital Community Psychiatry found women who denied their pregnancies were often diagnosed with schizophrenia. Women with mental illness may believe something other than a baby, such as a cancer or blood clot, is growing inside.

Food choices that can help you live longer
Jessica Firger