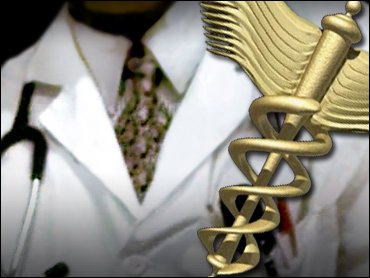 Concerned about picking up a nasty bug while in the hospital? Forget about whether your doctor washed his hands before examining you. Ask when he last dry-cleaned his tie.

Neckties worn by doctors can and do carry dangerous pathogens, a new study released Monday reveals. It suggests a bedside visit by a well-dressed physician could be hazardous to your health.

The presence of bugs on ties suggests doctors aren't washing their hands enough, or at the right times, said Dr. Allison McGeer, one of Canada's leading infection control experts.

"If physicians washed their hands when they were supposed to, their ties would not be contaminated," she said flatly.

But Steven Nurkin, one of the authors of the study, said that's not it: Doctors often adjust their neckties after they've washed their hands. Or they lean over and the tie touches one patient, then visit another and the ties touches that patient.

Nurkin, 27, who graduates in two weeks from medical school at the American-Technion Program of the Bruce Rappaport Faculty of Medicine in Haifa, Israel, presented his study Monday at the American Society for Microbiology meeting in New Orleans.

Nurkin said he got the idea for the research while doing a surgery elective at the New York Hospital Medical Center Queens in Flushing, N.Y. He noticed swinging neckties coming in contact with patient bedding, even patients themselves — because in Israel, doctors don't wear ties.

Earlier studies have found bacteria on everything from doctors' stethoscopes to pagers and pens. Doctors now know to clean those items frequently. Shirts and lab coats are washed more frequently, sometimes as often as every time they worn.

"Most people don't do that every time they wear a tie," he told Newsday. "You come home and throw the tie on your tie rack and a week or so later, you wear it again. It's rarely clean."

Of the 42 physician neckties sampled, 20 contained one or more microorganisms known to cause disease, including 12 that carried Staphylococcus aureus, five carrying a gram-negative bacteria, one that carried aspergillus and two ties that carried multiple pathogens. Staph bacteria, which often live harmlessly on the skin, can cause serious wound infections; Aspergillus, a mold, is an opportunistic infection that threatens vulnerable patients.

Nurkin emphasized the ties tested did not harbor any multidrug-resistant bacteria, but said, "The potential is there."

Some 5 percent to 10 percent of all hospital patients acquire an infection in the hospital, which translates into over 2 million infections, 90,000 deaths and over $4.5 billion in annual costs nationwide, the study notes.

McGeer, head of infectious diseases at Toronto's Mount Sinai Hospital, suggested these finding probably also pertain outside hospitals, noting male pediatricians often wear ties with cartoon themes to entertain their young patients. "And they should probably think twice about that."

McGeer said it's easy to see how easy it might be to spread antibiotic-resistant bacteria and other pathogens.

"I go see a patient who has MRSA," she explained, using the acronym for methicillin-resistant Staph aureus.

"I get MRSA on my hands, I transfer it to my tie. Then I wash my hands.... While I talk to the (next) patient, I fiddle with my tie. And then I transfer the MRSA back from my tie to my hands. And that's what would create the problem."

So what's the solution to the tie dilemma?

Nurkin doubt is bow ties, nor disposable "tie condoms," one suggestion from his group. Instead, he recommends "abolishing ties from clinical practice altogether."