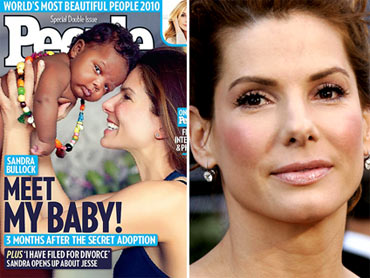 It didn't come as a great surprise when Sandra Bullock told the world, in People magazine, that she

But when she also revealed that the couple had adopted a baby boy, it was a stunner.

It turns out, "The Insider" host Lara Spencer noted on "The Early Show" Thursday, that Bullock and James had been trying to adopt a baby for four of the five years they were married.

Bullock told People she'll be raising the now 3-and-a-half-month-old Louis Bardo Bullock as a single mom, and that she and James began the adoption process four years ago, after seeing the devastation left behind in New Orleans by Hurricane Katrina. The baby was born in New Orleans.

The new mom says she named him after Louis Armstrong, inspired by his song, "What a Wonderful World."

Bullock observed to People, "It's astounding to watch a human being grow right before your eyes."

James also commented in the People piece, saying, "The decision to let my wife end our marriage and continue the adoption of Louis on her own has been the hardest. … Not having him around to love has left a huge hole in my heart."
And it's quite amazing, Spencer says, that she was able to keep the adoption under the radar, considering that Louis arrived at the start of a Hollywood awards season in which Sandra was the media's darling, and that she and James stayed in the spotlight when word surfaced days after Bullock won the Best Actress Oscar for "The Blind Side" that James had been romantically involved with tattoo model Michelle "Bombshell" McGee.

They had planned to withhold word of the adoption -- the mother of all secrets -- until after the Oscars.

Bullock and James told only a handful of close friends and relatives when Louis became a member of their family in January. "She knew the people they were going to tell would not reveal their secret," People Assistant Editor Jen Garcia says. "They all knew how incredibly important it was for her to keep Louis safe."

Ironically, Bullock pointed out to People, "The Blind Side" had many parallels to her real life, saying, "I wanted him all to myself. … Here I was, promoting a story about a family who adopted a son, and here we were, having done the same thing."

"She just knew it wasn't the world she wanted to bring her son into," Garcia says. "The craziness. She wanted this to be a private thing, where she enjoyed her new son at home, with her family."

Bullock told People she was blindsided by that relationship, adding, "All I remember is thinking I need to get Louis out of here before the vultures descend."

The addition to her family is why she's waited to file for divorce, according to CBS News legal analyst Lisa Bloom, who says, "She had to work out with Jesse behind the scenes that she would be the sole parent of the baby."

Bullock says she panicked when she heard that the adoption had gone through, because of the timing of awards season, telling People, "I just didn't understand why the universe was deciding a child needed to be with us now."

But then, she says, she came face-to-face with her new son, and said, " 'Oh, there you are!' I never had a moment of worry again."

Spencer says Bullock cared for James' three kids when he went to rehab in the wake of his split with her, and Bullock hopes they can all stay in contact, even though she plans to raise Louis alone.

The issue of People with the Bullock articles hits newsstands Friday.