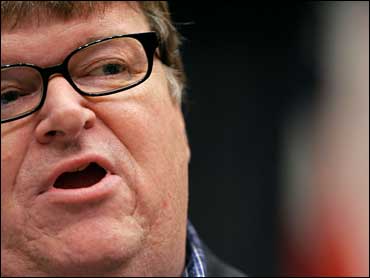 Michael Moore looked to his friend Borat to help muster the nerve to sail into Guantanamo Bay.

Cohen told Moore he had drawn inspiration from the filmmaker's documentaries, in which Moore doggedly pursues corporate and political bosses and puts himself into uncomfortable situations. Moore said Cohen thanked him for helping to provide the courage for his own daring adventures on "Borat," in which Cohen's Kazakh alter-ego wrestles naked with his portly producer and draws the ire of a rodeo crowd for butchering the national anthem.

2"I said to him, 'But yeah, I've never done anything like wrestle naked with another guy on the floor of an insurance-brokers or mortgage-brokers convention,'" Moore told The Associated Press. "So after I saw 'Borat,' if he says I was an inspiration for those things, I now have to up the ante for him. So we sailed into the mined waters of Guantanamo Bay with sick 9/11 workers and a bullhorn."

The scene in "Sicko" features Moore calling to guards at the U.S. prison in Guantanamo, Cuba, which houses terror suspects captured in military operations.

After seeing news reports about quality medical treatment the prison provided detainees, Moore went there to seek similar care for ailing Sept. 11 rescue workers who were having trouble getting health coverage in the United States.

Moore got no response from Guantanamo, so he took the workers to Cuba, where they received treatment. The U.S. Treasury Department began an investigation in May on whether Moore's trip violated the trade embargo prohibiting travel to Cuba.

What was Moore thinking as he stood on the boat, calling through a bullhorn outside Guantanamo? "Two thoughts. I've never seen anybody sail a boat into Guantanamo Bay in a movie or on TV. I've never seen that," Moore said. "And the second thought: What the hell am I doing? There's mines. This whole bay is mined, I think, by the Cubans and the Americans on each other's sides. There's guard towers, there's soldiers with guns. How crazy is this?"

Earlier in the week, Moore made news by suggesting that California Gov. Arnold Schwarzenegger improve health care in America's largest state by borrowing ideas from the governor's native Austria.

"I would like Gov. Schwarzenegger to say that he wants the citizens of California to have the same, fine, universal health coverage he got as a young man in the country of Austria," Moore said Tuesday. "That's all we're asking for, governor. Just give us the Austrian plan," Moore said at a rally outside Los Angeles City Hall for supporters of universal health care. "That great Austrian health care system that provided you with that fine body that you brought to this great country."

With his health care documentary "Sicko" opening nationwide Friday, Moore accompanied his advice with a few kind words for Schwarzenegger, who has proposed a plan to extend health care coverage to most uninsured Californians and require all residents to carry insurance.

"Sicko" features health care horror stories from Americans who suffered financial hardship or lost loved ones after health insurers declined coverage. The film also chides U.S. officials for failing to follow the lead of countries that have universal health coverage, such as Canada, Great Britain and France.

Harvey Weinstein, co-chairman of the Weinstein Co., said that because of its wider release, "Fahrenheit 9/11" came and went at theaters faster than he wanted. With "Sicko," he said he hoped for a longer shelf life similar to last year's "An Inconvenient Truth," a documentary chronicling former Vice President Al Gore's campaign to educate people about global warming.

"We saw the effect Al Gore's movie had. When President Bush comes out for global warming, you know 'An Inconvenient Truth' had an impact," Weinstein said. "'Fahrenheit,' we went wide and we went fast. I'm thinking that like the Al Gore movie, maybe we should play a long time. I don't mind sticking around and just keeping the debate going."