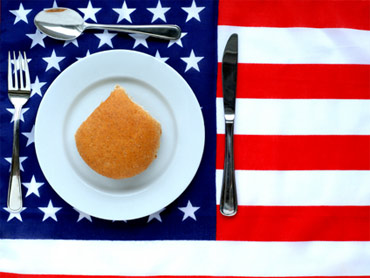 And, oh, how they've changed!

Katherine Brooking, a nutritionist and contributor to Cooking Light magazine, told how, in just 50 years, Americans have dramatically altered the way they eat -- and not for the better:

Where America Stands: How often we eat together: Weekday
Most of the Time: 74 percent
Some of the Time: 20 percent

Where America Stands: When We Eat Together
The TV Is On Always: 33 percent
Sometimes: 27percent

Portion size, one of the major indicators of how healthy and how much we are eating as a population, has grown. Fifty years ago, portion size was pretty steady and relatively healthy. But as fast food franchises began to rise in the 1960s and '70s, portion sizes grew quite a bit. The chains were anxious to offer you larger portions for a better sense of value. It's important to note, also, that portion size is a key factor in weight gain and obesity has increased since the 1970s in both adults and children. Another important statistic to keep in mind, 54 percent of Americans will eat until their plate is clean. So as our portion size has gone up, so has our appetite.

Between 1977 and 1996, portion sizes and energy intake increased for mostly all key foods.

The good news is that we know what a properly portioned meal should look like. First, use a smaller plate -- something around seven to nine inches is perfect. If your plates are larger than that, you'll add more food to make it appear full and most likely eat it. Also, what is on your plate should be portioned correctly. If, for instance, you are having a plate of grilled chicken, broccoli, and mashed potatoes, half of your plate should be broccoli and only a quarter chicken and mashed potatoes.

If you are concerned about your portion size or plate size, divide your plate in half. Half of it should we filled with fruits or vegetables and the other half equal parts protein and starch.

Because portion size has increased and calorie intake has increased in the last 50 years, the obesity rate in the country has more than doubled in the country since the 1980s. Adult obesity has increased from 14.5 percent in 1971 to 30.9 percent in 1999. The Center for Disease Control and Prevention reports that in the 1980s, the average adult gained eight pounds. This is a much faster rate of weight gain than seen in the decades before. So the 1980s marked the start of a period when obesity in the US really became a problem.

Today, more Americans than ever - 66 percent, according to the National Institutes of Health -- are clinically overweight, while one in every three is obese (severely overweight). In fact, figures released by the Centers for Disease Control and Prevention show that the nation's obesity rose six percent between 1998 and 1999 alone. (To put that figure in perspective, consider that American obesity rose a total of six percent during the seven-year period before 1998.)

Over the past three decades, the childhood obesity rate has more than doubled for preschool children aged 2 to 5 years and adolescents aged 12 to 19 years, and more than tripled for children aged 6 to 11 years. At present, approximately nine million children over 6 years of age are considered obese and 15 percent are considered at risk of becoming overweight.

Unfortunately, because Americans have increased their portions, their daily calorie intake has also increased. That is largely due to the growth in sweets, the mass consumption of soft drinks, and the prevalence of alcohol. Sweets, desserts, soft drinks and alcoholic beverages account for nearly 25 percent of all calories consumed by Americans. Healthy fruits and vegetables make up only 10 percent of caloric intake in the U.S. diet.

By 14 years of age, 32 percent of adolescent girls and 52 percent of boys in the United States are consuming three or more eight-ounce servings of sweetened soft drinks daily. Among young children, soft drink consumption increased by 23 percent, while fluid milk consumption decreased by 16 percent between the late 1970's and early 1990s.

If you are looking for ways to cut down on the calories, eliminate some of those snacks, the sodas and the alcohol. They will help you bring your calorie count down before you know it.

In the last 20 years, we have really buttoned down on heart disease and stroke and their connection to high sodium intake. The definitive studies, the DASH study and the DASH sodium study only came out in the 1990s, and those are the first medical publications to definitively link the two. The news is not good, as our consumption of processed foods, which are high in sodium, has continued to rise.

American adults ingest nearly 4,000 mg of sodium daily on average, far exceeding current recommendations. The Department of Health and Human Services and the World Health Organization as well as others all support a daily sodium intake of no more than 2,400 mg. Adults who are middle-aged, elderly, already have hypertension or pre-hypertension, or who have a family history of hypertension should consume less than 1,500 mg.

The main culprit of sodium: Roughly 75 percent of Americans' daily sodium intake comes from salt in processed and restaurant foods.

The good news is that it is so easy to lower your sodium. In this economy, we know that people are beginning to cook at home more and more, something that we think is so important to maintaining a healthy diet. By preparing your meals and your family's YOU control the salt in your food.

Historically, we didn't start associating fat and cholesterol until the 1970's. We really started talking about the dangers of saturated and trans fats in the '70s and '80s. On average, the daily intake of saturated fat in the United States is about 11 percent. In 2000, the U.S. Dietary Guidelines Advisory Committee recommended that less than 10 percent of daily calorie intake be composed of saturated fat. It is important to remember that even if the population average is close to a recommended level there still might be people in the population who consume more than that. There are basically four kinds of fats, saturated, monounsaturated fats, polyunsaturated fats, and trans fats. Lately, trans fats have become such a hot topic that they have been eliminated from fast food chains and most restaurants.

We know that saturated and trans fats are bad for us, but not too long ago, experts believed eating more cholesterol caused cholesterol to accumulate in the bloodstream and on artery walls. That meant foods high in cholesterol but otherwise heart-healthy, like eggs or shrimp, were considered just as taboo as a stick of butter. Thankfully, research has matured in recent years and scientific opinion has changed.

We now know that cholesterol levels are largely influenced by the kind of fat you eat. Two helpers are monounsaturated fats (in olives, avocados, and olive and canola oils) and polyunsaturated fats (found in vegetable oils, soybeans, fish, shellfish, and seeds). Nuts are rich sources of both. We know that these fats are important to a heart-healthy diet, and they add tons of flavor and variety to everyday eating.

If you want to cut down on your fat intake, avoid saturated fats such as butter, or deeply fried foods. Stick to salmon, olive oil, nuts and all natural peanut butter.

The "Mediterranean diet" typical of traditional Italian and Greek cooking, has been found to be one of the healthiest eating patterns in the world. This diet consists mainly of fruits and veggies, beans and nuts, whole grains, fish, olive oil, small amounts of dairy and meat, and red wine. Also, traditional Japanese cooking is known to be healthful with fresh fish and vegetables at every meal.

Many regions of the world have started to adopt a more American eating pattern of fast foods, processed foods, larger portions, in recent years. As a result, countries in Asia -- notably China -- and even Europe, such as the United Kingdom and France, are experiencing a rise in obesity.