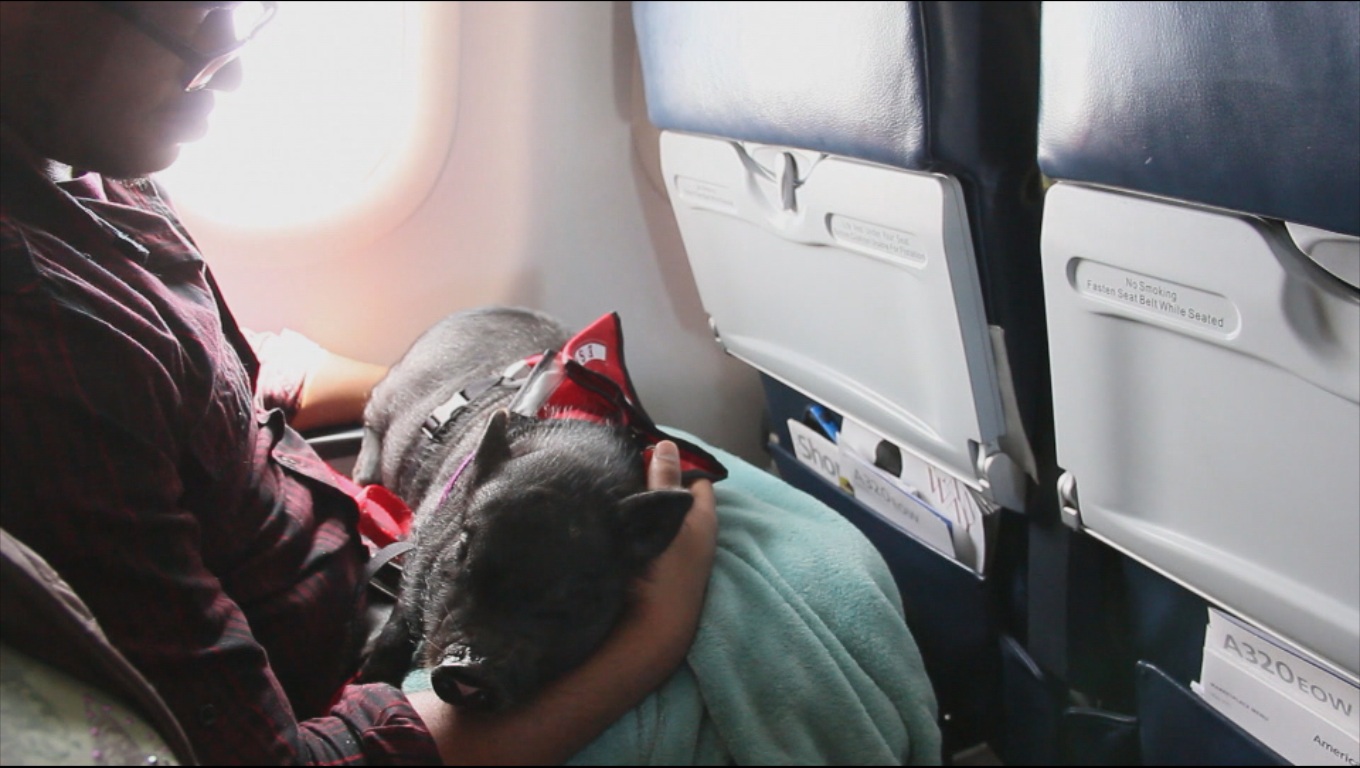 The Air Carrier Access Act states "no carrier can discriminate" against individuals demonstrating "a physical or mental impairment" to board with animals.

CBS News staffer Swainson Gill and his family pet dog, Pharaoh, were volunteers to demonstrate how easily pets can travel for free under those rules.

Pharaoh ported the required vest, but he is not an emotional support animal on official business.

"I have not met a flight attendant who has not had some experience with a pet in the cabin," Association of Professional Flight Attendants national president Laura Glading said. "I don't really want to brush with a broad brush everyone who has an emotional support animal. They can be very, very helpful. I have a dog myself."

Emotional support animals are often mistaken for, but are not service animals, which are trained in specific tasks to assist people with disabilities.

"In a very real sense my safety, my life is in the paws of my dog," The Seeing Eye president and CEO Jim Kutsch said. "The best service animal is the one that isn't noticed. The dog that is very quietly behind the scenes doing its job to mitigate the disability of the human half of the partnership."

Anyone claiming an emotional need, with access to the internet, and a one-time fee of about $150 can apply for certification. That's about the same most passengers pay to travel -- each way -- with pets not considered an emotional support.

"I think a lot has to do with not having to pay, a way to bring your pet along and it's really gotten out of hand," Glading said.

Swainson logged on to one of the many sites offering counseling services. His reported disability: "a fear of flying," one of the many reasons given, and difficult to challenge.

The questionnaire was complete in less than five minutes. Two weeks later a letter confirming his dog as an emotional support animal arrived along with the official-looking vest.

Within days Swainson and Pharaoh were on their way from New York to Washington, D.C. to take in the sites.

"It's amazing how easy it was," Swainson said.

While Pharaoh's behavior would earn him his wings, not every pet or passenger is as comfortable at 30,000 feet.

"We had 50 documented reports where there was a return to the gate, or somebody was bitten or there was non-compliance," Glading said.

Currently there are no rules at the Department of Transportation as to what constitutes an emotional support animal. There's not even a rule as to how many animals can fly on any one flight.

CBS News found a pig at Ross Mill Farm in Pennsylvania and paid a fee to take the 4-month-old pot belly named Valley on an adventure with Swainson. He followed up with a counseling center in Colorado to obtain a letter prescribing the pig as the "primary treatment" for his "psychological disability" at no extra charge.

"Pigs are becoming a very popular pet again and people find they get tremendous emotional support from their pig," Glading said.

Valley the pig was treated like a celebrity at the Charlotte terminal.

Aside from acting a little like a pig during meal service, he flew without incident. Not only was it easy to get Valley on a flight, his new found popularity made it difficult to leave.

Valley proved to be a clean and respectable passenger, and while some animals are so disruptive they're removed before takeoff, anything goes once you're up in the air. And that's what really concerns those working in the cabin.