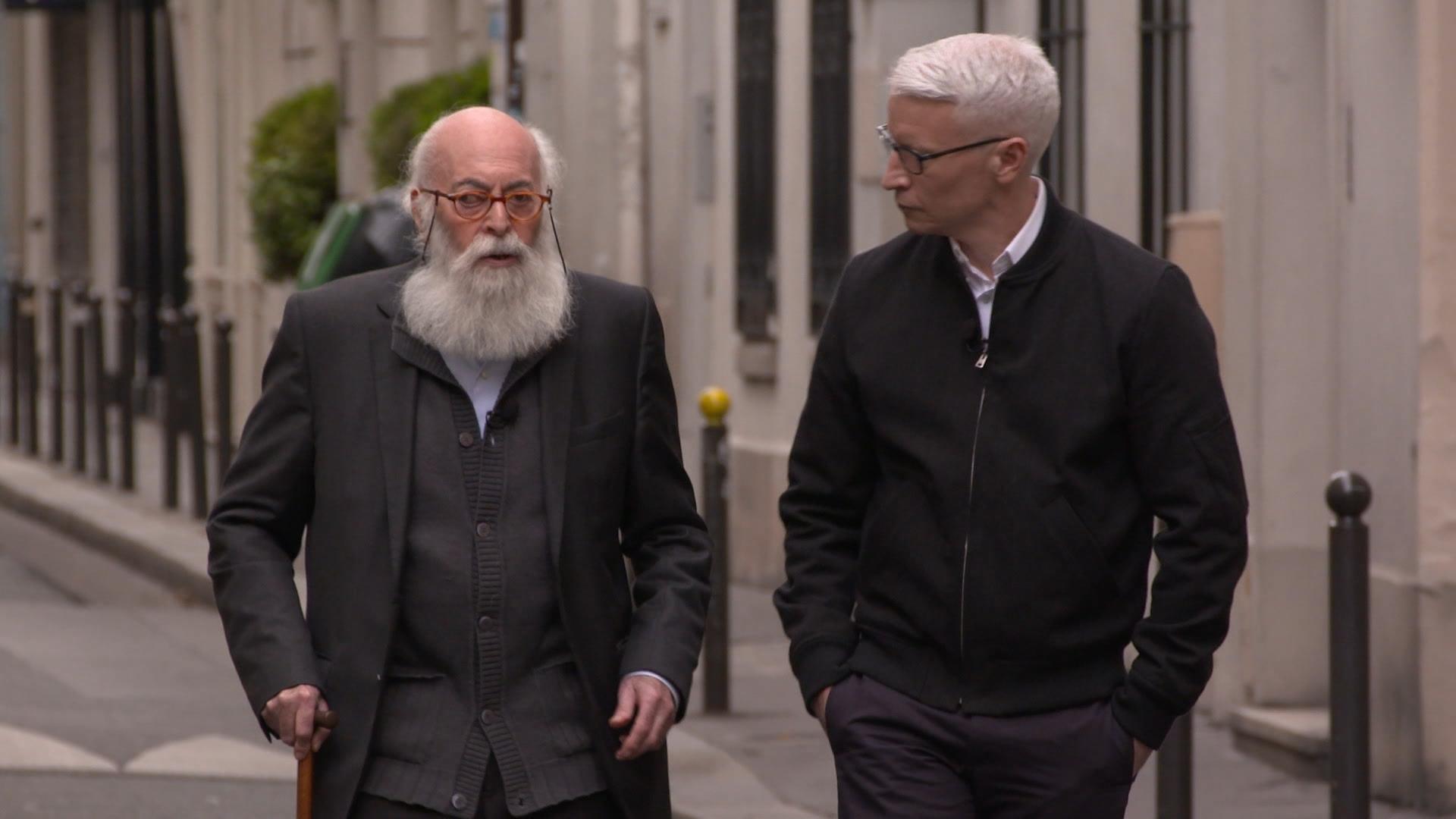 It's well known the French government collaborated with the Nazis during World War Two, helping send tens of thousands of Jews to their deaths. What is less well known are the heroic efforts by members of underground resistance groups to save Jews in France. Many of those who risked their lives are now gone or have been reluctant to share their stories. 92-year-old Adolfo Kaminsky was a Jewish teenager when he joined the French resistance. He had a unique talent he had picked up while working at a dry cleaners, an expertise that helped him become one of the greatest forgers in France during the war.  Incredibly, he and the resistance networks he worked with created fake identity documents that helped save the lives of as many as 14,000 Jewish men, women, and children.

Hitler's army entered Paris with a massive show of force. German troops marched past the Arc de Triomphe and raised the Nazi war flag over a stunned city.  Hitler personally attended the surrender ceremony. The Nazis took control of Paris, but relied on French authorities and police to begin to identify Jews and round them up. As part of Hitler's final solution, tens of thousands of Jews, and others targeted by the Nazis in France were arrested and loaded onto trains bound for Auschwitz and other concentration camps.

French resistance networks tried to save as many Jews as possible -- especially children -- giving them fake identity papers and smuggling them across the border -- or hiding them in farms, schools and convents in France.  Adolfo Kaminsky was just 18 when he began to work as a forger for the resistance.

Adolfo Kaminsky: We had to move very quickly and help these people disappear before they were arrested.  So it was just racing against the clock and actually, I called it racing against death.

Anderson Cooper: That's what you were doing?

Kaminsky still has some of the fake documents he made -- identity cards, passports, food ration cards, and birth and marriage certificates.

Anderson Cooper: So this is, this is your work? This is fake?

Adolfo Kaminsky: That's all my work. It's all false.

Jewish sounding names had to be replaced with more French-sounding ones, and the word Jew had to be somehow erased.

Anderson Cooper: Wow look at that, that's incredible.  What is that?

Adolfo Kaminsky: That is a real one.  That is a model we would use.

Anderson Cooper: So this stamp -- this word, Juif, was the difference between life and death?

Adolfo Kaminsky: Yes. Having Jew -- stamped on anything -- meant you were in danger.

Two of the Jewish children who were saved by the resistance network Kaminsky worked for are Edith Mayer and Sarah Miller. Edith was 15 when she was forced into hiding, after her father and brother were sent to Auschwitz.

Anderson Cooper: What sort of documents did you need in order to be able to live?

Edith Mayer: Well in France at the time, you were nothing if you didn't have ID. So I had to have a birth certificate and I had to have a carte d'identite. I guess, you know, an identity card.

She showed us a copy of the fake birth certificate that saved her life.

Anderson Cooper: They gave you a new name.

Edith Mayer: They gave me a new name, so instead of Edith Mayer, I became Elise Maillet, which sounds more French. And my fake father was Jules Maillet and my fake mother was Elian Marie Chauvin.

Anderson Cooper: It was critical that the papers be absolutely correct.

Anderson Cooper: If the forger made a mistake.

Edith Mayer: Yeah, you were done for.

Sarah Miller used her fake papers to get a job when she was 16 -- hiding in plain sight working as a salesgirl in a store frequented by Nazi troops.

Anderson Cooper: You were interacting with German soldiers all the time at work?

Sarah Miller: I tried my best to speak as little as possible.

Anderson Cooper: Obviously if they had known you were Jewish.

Sarah Miller: Believe me, they would have come and picked me up and send me to the camp, that's for sure. But they didn't know.

Adolfo Kaminsky took us to the street where he ran his secret lab, right under the nose of the Nazis.  It was located in a narrow attic room in the center of Paris, just blocks from the Cathedral of Notre Dame. There, Kaminsky and three others used chemicals and other tools of the forging trade to create and alter documents, all the while avoiding detection by pretending they were artists.

Adolfo Kaminsky: The neighbors thought we were painters. We had paintings on the walls and paintbrushes and all kinds of colors.

Using everyday items, like this sewing machine he still has, he created perforations in stamps. He salvaged metal from junk shops, and used wood blocks and inks to create rubber stamps. He also manufactured paper and reproduced watermarks, letterheads and official signatures.

Anderson Cooper: You could make the document and the signature, but also the stamp and even the raised watermark?

Anderson Cooper: And the pipe?

Adolfo Kaminsky: The pipe was to print with this…so you would apply the ink and you would put a piece of paper there and…

Anderson Cooper: And you rub it?

Adolfo Kaminsky: And then there you go and just do this… and it was perfect.

His secret lab would become one of the biggest suppliers of forged documents for Jews in France, producing, he says, as many as 500 a week.

One of the people who worked with him is 93-year-old Suzy Schidlof. We met her in a small town near Bordeaux where she has an art studio.

Anderson Cooper: Was he a great forger?

Suzy Schidlof: He did incredible things. He had a sort of genius, first to find very very simple answers to problems and also to learn things that other people learned years, to learn it in a few days.

Schidlof was 19 years old and a fine arts student when she joined the resistance with her sister Herta. She says they spent such long hours in the clandestine lab with Kaminsky that she often fell asleep at her workstation.

Anderson Cooper: In the lab, what was your job?

Suzy Schidlof: Everything which has to do with drawing -- with imitating handwriting.

She also drew stamps -- or in many cases, partial stamps -- because they looked more realistic.

Suzy Schidlof: No, it's art.

Anderson Cooper: It's amazing when you think back to how young you all were and how brave.

Suzy Schidlof: I think it's much easier not to be afraid when you are very young.

They all knew the risks, but Schidlof says Kaminsky in particular, was determined to take them.

Suzy Schidlof: It so fits with his character. He could not stand people being oppressed and not being free and false papers give you the freedom.

Nobody knew that better than Adolfo Kaminsky. When he was 18, his family was arrested and sent here to Drancy, a concentration camp in the suburbs of Paris. Miraculously, after 3 months, they were released. Though they were Jewish, they had Argentinian citizenship, and at the time, Argentina was neutral in the war. But in Drancy, Adolfo witnessed countless others being put on trains and sent to Auschwitz.

Adolfo Kaminsky: For 3 months, every week, I saw 1,000 people be deported. It was horrible suffering.

Anderson Cooper: When you saw people going onto trains, did you know what it meant?

Adolfo Kaminsky: Yes, we knew. In fact, everyone knew deep down. There were some people who didn't want to believe it. But everyone knew. There was just a huge unimaginable quantity of people murdered.

After being released from Drancy, Kaminsky's father decided the family should split up and adopt false identities. He sent Adolfo to pick up their new papers from a member of the resistance.

That fateful meeting took place in front of the Sorbonne University. When the man from the resistance learned that Kaminsky had worked at a dry cleaners, and knew how to remove stains, he got excited.

The resistance had been desperately trying to figure out how to erase a permanent blue ink from official documents. Kaminsky knew the chemical that could do the trick: lactic acid.

Anderson Cooper: When you realized that lactic acid could work to remove this blue ink - how important was that?

Adolfo Kaminsky: It was very important because that enabled us to use existing identity documents, existing papers that were real. And you could erase things from them without leaving any trace.

It was at that meeting that Adolfo Kaminsky decided to join the resistance.

Anderson Cooper: When he asked you to join, you weren't frightened?

Adolfo Kaminsky: Afraid of what? Afraid of what? The risk was the same if you did nothing. So at least working in the resistance, I could fight. I was fighting for humanity.

Anderson Cooper: When you realized what he had done during World War II, what did you think?

Adolfo Kaminsky's daughter Sarah says she first heard about her father's heroic work when she was in high school. But it took years before he could talk with her about the horrors of the occupation and the memories of trying to save people from being deported to concentration camps.

Anderson Cooper: That he survived and the others didn't?

Anderson Cooper: By saving others, you saved yourself?

Sarah Kaminsky wrote a book about her father and they share his story with high school students throughout France.

Anderson Cooper: Do you feel like you know your father now?

Anderson Cooper: And you're proud of him?

Sarah Kaminsky: I'm very proud of him. Very. I'm always asking myself what would I have done.

Anderson Cooper: If you were in his shoes...

Sarah Kaminsky: Yes, I'm sure that I would not have had his courage.

Anderson Cooper: There's not many people who would have.

"Without papers, you were as good as dead."

Sarah Kaminsky: No, I'm sure of that. What I like in his story is that, a few people can make a difference in front of big armies. So it gives a lot of hope I think.

In all, 76,000 Jews in France were sent to death camps during the war. Only about 2,500 of them survived. Edith Mayer and Sarah Miller, who went into hiding, eventually were smuggled into Switzerland. To this day, they don't know if it was Adolfo Kaminsky or one of his colleagues who made their false papers.

Anderson Cooper: What would you say to Adolfo Kaminsky or to the other forgers?

Edith Mayer: They have my eternal gratitude.

Anderson Cooper: They saved your life

Sarah Miller: Absolutely. I agree with her. They saved my life.

Kaminsky was awarded the Medal of the Resistance after the war, along with a stack of other medals.  But he doesn't like to display them. He keeps them in a suitcase under his bed.

Anderson Cooper: You never take them out even to look at them?

Adolfo Kaminsky: No, you know, I've seen them.  They don't change.

Anderson Cooper: Were you one of the best forgers?

Adolfo Kaminsky: Now I'm nobody. But I think I was able to meet the challenge. I did what I had to when I had to… and I was lucky to be able to do it.

Who betrayed Anne Frank and her family?
Anderson Cooper