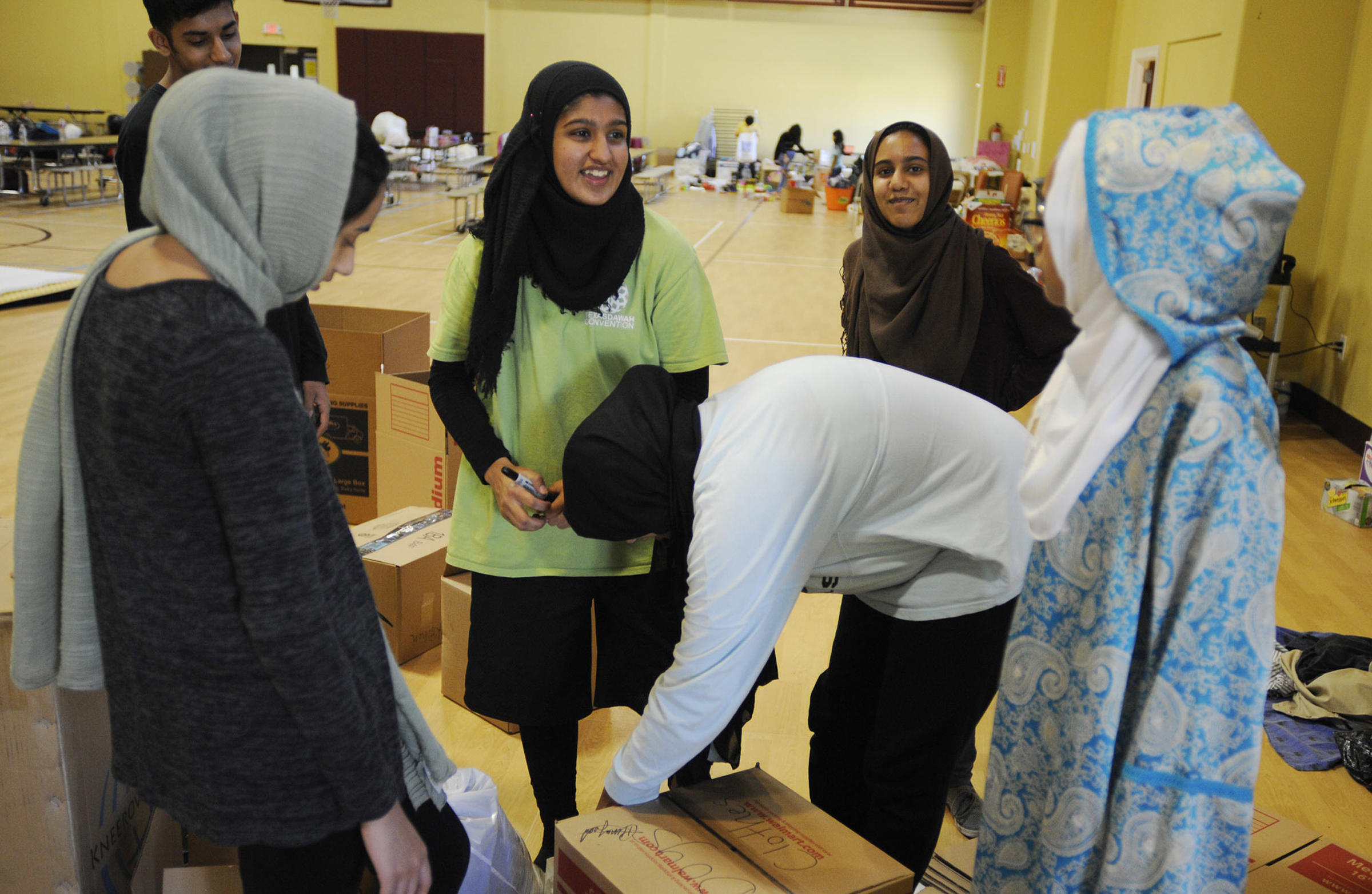 HOUSTON -- Houston's Muslim community has opened many of its community centers to people seeking shelter from Harvey and sent hundreds of volunteers to serve food and deliver donations. Some have rescued neighbors from high water.

Their efforts continue, even as mosques welcome congregants for Eid al-Adha, also known as the festival of sacrifice and one of Islam's holiest days, from Thursday evening through Friday evening. An Islamic Society of Greater Houston leader insists evacuees won't be displaced even if people have to pray in the parking lot during the festival's Friday morning prayer.

Islamic leaders and scholars say such efforts underscore the spirit of the festival, which commemorates the willingness of the Prophet Ibrahim to sacrifice his son before God stayed his hand.

An estimated 200,000 Muslims live in the Houston area.

The gymnasium at the Champions Islamic Center is covered with mats and blankets, donated clothes and boxes of food lining its walls. On the eve of Eid al-Adha, it had become the temporary home for 15 of the thousands of Harvey evacuees, Muslim and non-Muslim.

As in other catastrophes, from Superstorm Sandy in October 2012 to Hurricane Katrina in 2005, and the terrorist attacks of Sept. 11, 2001, American Muslims have been counted both as victims and as participants in the recovery.

Despite Harvey's historic flooding hitting the Houston area just days ago, the rituals of fasting, an iftar dinner and prayers continue at the Champions mosque, also known as Masjid al-Salam, and other community centers in Houston. But some families who participate in those rituals were spending the night at a mosque because they couldn't return to their homes. Others would head from prayers Friday morning to volunteer at food banks and shelters. Still others found themselves at one of the city's mega-shelters, unable to get to a mosque for the holiday.

Sitting in a chair inside the Champions mosque's gymnasium, Mabel Rozier recounted how she was rescued from her third-floor apartment as the floods outside reached the second floor. A sheriff's deputy dropped her at the mosque, which at its peak took in around 35 people.

Rozier she said she was grateful to have a comfortable place to eat and sleep while she waited to return home.

"Muslims are just like any other type of person. They're caring, loving, giving people," said Katherine McCusker, also staying in the gymnasium. "I feel very fortunate that they were open and willing to come and have this space."

At the George R. Brown Convention Center, which gave shelter to around 10,000 people at its peak, a handful of Muslim evacuees were organizing a small Eid prayer for Friday.

Hasan Logan, 33, has been meeting with other Muslims during the several days they've stayed inside the convention center, sometimes blocking off a small prayer space with chairs and their shoes.

Nearby, Ismail and Rabia Vaid were volunteering with the American Red Cross, which has run the shelter and expanded it as it doubled its original 5,000-person capacity. For several nights after their shifts ended, they slept in cots set aside for volunteers and then returned to do more.

"It's not about religion," Ismail Vaid said. "When a problem or chaos happens - whether it's natural or man-made - as a Muslim and as humanity, we have to participate."

Liyakat Takim, a professor of global Islam at McMaster University in the Canadian city of Hamilton, Ontario, said what's happening in Houston is the best example of Islam in action - and what is most important to the faith.

Islamic leaders and scholars say the work underscores the spirit of the festival, which coincides with the hajj, or pilgrimage to the Islamic holy city of Mecca, Saudi Arabia. Muslims slaughter livestock and distribute the meat to the poor, commemorating the willingness of the Prophet Ibrahim - also known as Abraham to Christians and Jews - to sacrifice his son in accordance with God's will, though in the end God provides him a sheep to sacrifice instead.

"The ultimate goal of holding and practicing all of these rituals ... is to help others," said Imam Hassan Qazwini, leader of a Detroit-area mosque and one of the top Shiite Muslim leaders in the United States. His mosque, the Islamic Institute of America, is dedicating this Eid to raising money for storm victims, and state and national Islamic organizations also have been spearheading similar efforts.

"I believe opening your door on the day of Eid for refugees and people in need is a form of worship itself," he said.