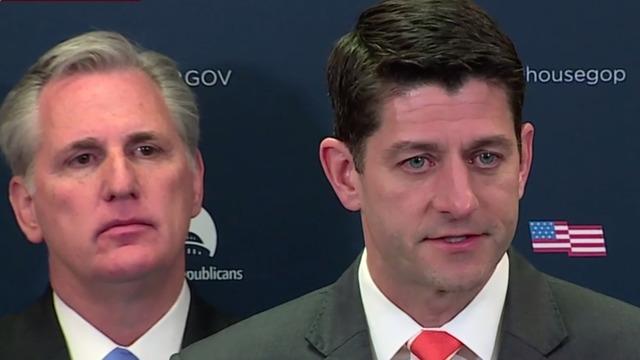 Immigration talks got back on track Friday as members huddled to continue their attempts to craft an immigration proposal that can pass the House and head off an effort to force a series of votes on other bills led by moderate Republicans and Democrats.

"There is not a bill right now but there is a real strong willingness to get an agreement and we are going to keep working until we get it done," Republican Whip Steve Scalise, R-Louisiana, told reporters as he emerged from the meeting.

Talks appeared to hit a snag Thursday afternoon when Rep. Jeff Denham, R-California, believed he and his fellow moderate members had accepted a proposal from conservatives for a new visa system that would be open to DACA recipients and allow them to eventually have a chance to apply for citizenship. Conservative members said there was no such deal.

But the negotiators are considering a new green card program that would award points to applicants based on merit. Rep. Carlos Curbelo, R-Florida, another one of the moderate leaders, said the goal would be to not lower overall legal immigration levels but shift some total visas into employment categories rather than family-based categories.

It's still unclear whether conservatives will get on board with such a system, which some see as a "special" pathway to citizenship for people in the U.S. illegally – a nonstarter on the right.

"This new merit-based green card program, the definition comes down to can that be interpreted to a special pathway? I think a lot of us do interpret that as a special pathway and I think that's where we are," Republican Study Committee Chairman Mark Meadows, R-North Carolina, said as he left Friday's meeting.

Members across the ideological spectrum said Friday's meeting was positive and that they were making progress on multiple issues. Curbelo estimated there was agreement on 85 percent of the issues after the Friday meeting, up from 80 percent beforehand.

"I originally thought that border security would actually be easier – and I think at the end of the day, it will – but I think now that we are getting down to the fine points of what border security means, it is going to require some further debates," he said, including how border security is defined and how to ensure that the number of immigrants in the U.S. illegally doesn't continue to rise. Conservatives also want to strengthen immigration enforcement inside the country.

"There is a whole lot more that we agree on than what we disagree on and yet there is still not a deal," Meadows said.

Another Freedom Caucus Member, Rep. Scott Perry, R-Virginia, said that issues including guest workers, e-verify and sanctuary cities may be addressed in separate legislation that gets a vote around the same time as a bill that deals with border security and a DACA fix.

Meanwhile, Curbelo and Denham, who are leading the effort to force a series of votes on other immigration legislation through a procedural measure called a discharge petition, said they still believe they will get the remaining three signatures they need to cross the 218 threshold by next Tuesday. Doing so will set them up for a vote on the four immigration bills on June 25. That would not preclude negotiations from continuing.

"I don't think it would disrupt our negotiations at all. And I think it would guarantee that we would have debate and votes on the House floor which is all that we have asked," Curbelo said.

Denham said that if there was no agreement on a bill before Tuesday, they would encourage three more Republicans who have signaled their interest in signing the petition to put their names in. He said it was "extremely likely" they would get 218 signatures.

While most of the negotiators say they are heading home for the weekend, they believe a deal is within sight.

"Can we get something together by Tuesday. I don't know. The Caps won this year, didn't they?" Meadows mused as he left the Capitol.