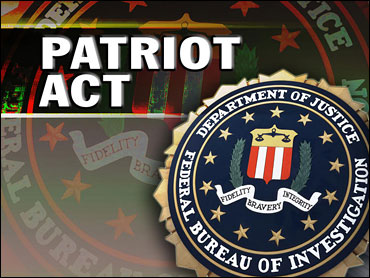 WASHINGTON - The House on Monday agreed to a 10-month extension of three key law enforcement powers in the fight against terrorism that some privacy advocates from both the right and left regard as infringements on civil liberties.

The House measure, passed 275-144, would extend authority for the USA Patriot Act-related provisions until Dec. 8. Common ground must be found with the Senate before the provisions expire on Feb. 28.

At issue are two provisions of the post-Sept. 11 law that give counterterrorism offices roving wiretap authority to monitor multiple electronic devices and court-approved access to business records relating to a terrorist investigation.

The third "lone wolf" provision of a 2004 law permits secret intelligence surveillance of non-U.S. individuals not known to be linked to a specific terrorist organization.

Last week the House, in an embarrassment for the new GOP leadership, failed to pass the same bill under an expedited procedure requiring a two-thirds majority. Twenty-six Republicans joined 122 Democrats in voting against it. Monday's vote drew 27 Republican no votes.

The main objections are to what critics see as unconstitutional search and seize authority and big government intrusions into private lives.

But House Judiciary Committee Chairman Lamar Smith, R-Texas, argued that the courts had consistently upheld the constitutionality of the provisions and that if Congress fails to extend them, "we will forfeit our ability to prevent terrorist attacks." He said a temporary extension "is the only way to provide House members the time to study the law" and consider possible changes.

This time the bill was brought up under a procedure requiring only a simple majority for passage. Democrats got only one chance at changing the bill: an amendment stating that investigations must comply with the Constitution and that courts must give expedited consideration when a U.S. citizen argues that his or her constitutional rights have been violated. It was defeated on a party-line vote.

In the Senate, Judiciary Committee Chairman Patrick Leahy, D-Vt., on Thursday plans to bring before his committee a bill that would extend the three provisions through 2013 while tightening disclosure procedures. Republicans have countered with a proposal to make the three measures permanent.

There's pressure on the two chambers to reach agreement this week because next week, leading up to the Feb. 28 deadline, Congress will not be in session.

The White House has said it "does not object" to the 10-month extension proposed by the House but would prefer stretching the provisions through the end of 2013 because "longer duration provides the necessary certainty and predictability that our nation's intelligence and law enforcement agencies require."

Laura Murphy, director of the American Civil Liberties Union's Washington legislative office, said it was a mistake to renew the three provisions without added safeguards for privacy. "We urge the Senate to reject this bill and instead make the necessary changes that will bring the Patriot Act in line with the Constitution."