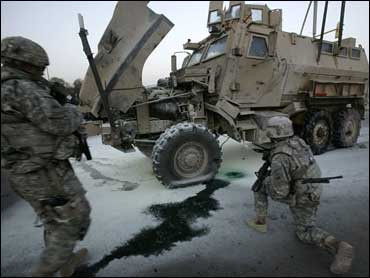 A long-delayed Iraq war funding bill sailed through the House on Thursday, along with historic increases in college aid for returning troops and help for the unemployed and Midwestern flood victims.

Republican allies of President Bush provided the winning margin in a 268-155 vote to provide $162 billion to fund U.S. operations in Iraq and Afghanistan well into next year.

Democrats opposed to the war, however, succeeded in using the Iraq funding bill as an engine to drive past White House resistance a sweeping revision to GI Bill college benefits and a 13-week extension of unemployment checks for those whose benefits have run out.

Lawmakers separately approved those domestic add-ons by a 416-12 vote, sending the combined bill to the Senate for a vote next week. The White House issued a statement supporting the legislation.

The measure also provides a quick $2.7 billion infusion of emergency flood relief for the Midwest, though more is expected to be needed to deal with the major losses in Iowa, Illinois and other states.

The bill would bring to more than $650 billion the amount provided by Congress for the war in Iraq since it started five years ago. Nearly $200 billion in additional funding has gone to operations in Afghanistan, according to congressional analysts.

It also would give Mr. Bush's successor several months to set Iraq policy after taking office in January - and spares lawmakers the need to cast more war funding votes closer to Election Day.

"The way it's been set up now, whoever ... is president will have a few months to think through how we are going to extricate ourselves," said House Appropriations Committee Chairman David Obey, D-Wis., a key negotiator.

The relatively brief debate featured only glimpses of the bitterness that consumed Congress last year as the new Democratic majority tried - and failed - to force troop withdrawals and other limits on Mr. Bush's ability to conduct the war. Most war opponents expressed frustration and a sense of resignation at having to yield to the lame duck president.

"The president basically gets a blank check to dump this war on the next president," said Rep. Jim McGovern, D-Mass. "I was hoping George Bush would end his war while he's president."

Republicans cited progress in Iraq since Mr. Bush beefed up troop levels last year in an effort to create stability in the war-torn nation.

"Our troops have made tremendous gains, and forcing them to reverse course - as most in the Democratic majority want them to do would be both irresponsible and reckless," said Minority Leader John Boehner, R-Ohio.

The new GI Bill essentially would guarantee a full scholarship at any in-state public university, along with a monthly housing stipend, for people who serve in the military for at least three years. It is aimed at replicating the benefits awarded veterans of World War II and more than doubles the value of the benefit - from $40,000 today to $90,000.

The GI Bill measure, authored by Sen. Jim Webb, D-Va., had such extraordinary support from both Democrats and Republicans that White House objections were easily overridden.

Administration representatives sought to curb its costs in closed-door talks, Obey said. Instead, the chief concession by Democrats was to add an administration-backed plan - costing $10 billion over 10 years - allowing veterans to transfer their benefits to their spouse or a child.

The White House tried much harder to kill the effort to extend unemployment benefits as part of the war funding bill. Just two weeks ago, it appeared the administration would probably prevail. But after the unemployment rate jumped a half-percentage point to a nationwide average of 5.5 percent, House Democrats engineered a veto-proof tally in support of the 13-week extension.

In late-stage talks with Boehner, a key figure in negotiating the overall agreement, Democrats dropped a plan to extend unemployment benefits for an additional 13 weeks in states with particularly high unemployment rates. They also agreed to require people to have worked for 20 weeks in order to be eligible for the extended payments.

In another key concession, House Democrats dropped a provision to pay for the GI college benefits by imposing a half-percentage point income tax surcharge on incomes exceeding $500,000 for single taxpayers and incomes over $1 million earned by married couples.

The move was long expected, but nonetheless riled moderate and conservative "Blue Dog" Democrats upset that rules requiring additions to federal benefit programs be paid for with additional revenues or offsetting cuts to other programs.

Democrats, many Republicans and governors across the country emerged the victors in a battle with the White House to block new Bush administration rules designed to cut spending on Medicaid health care for the poor and disabled.

On war spending, the bill would prohibit U.S. money from being spent on Iraq reconstruction efforts unless Baghdad matches every dollar spent. But negotiators dropped a demand that Bush negotiate an agreement with Baghdad to subsidize the U.S. military's fuel costs so troops operating in Iraq aren't paying any more than Iraqi citizens are.