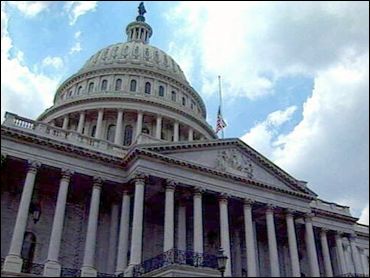 More than 1,000 days after the Sept. 11 attacks, the House made another attempt Thursday to prepare for a catastrophic event that killed 100 or more of its members.

The House, with a 329-68 vote, said states must hold special elections within 49 days of an announcement by the speaker that there were 100 or more vacancies in the 435-member body. A similar bill died in the Senate last year after House passage.

There was broad agreement over the need to take steps so Congress could recover and continue functioning after a cataclysmic attack, although some lawmakers said the special election approach would cause a legislative vacuum of weeks during a national crisis.

Last year, the House rejected a proposed constitutional amendment that would have allowed the House, like the Senate, to temporarily fill vacancies through appointments during exceptional circumstances.

House Judiciary Committee Chairman James Sensenbrenner, R-Wis., sponsor of the special elections legislation and chief foe of the constitutional amendment, argued that the House must preserve its unique tradition of having every legislator chosen by direct election.

"Without an elected House the entire federal government could be run and laws could be written without a single branch directly representing the popular will," he said.

Last April, the House approved a nearly identical bill to require special elections within 45 days of the loss of 100 members, but the Senate did not act on it.

This year, the time period was extended to 49 days in a concession to critics who said 45 days was inadequate for staging fair elections. This year's bill also allows states to hold primaries and makes sure military ballots from overseas are counted.

Lawmakers first examined the continuity issue during the Cold War, when the worst-case scenario was a Soviet nuclear attack.

The topic revived with the Sept. 11, 2001, attacks and the belief that United Flight 93, which crashed in Pennsylvania, was headed either for the Capitol or the White House.

As in the debate last year, supporters of the constitutional approach said that while 49 days was too short to organize a special election, it was too long to leave the House without enough members to govern.

An attack that killed the president and most lawmakers, without an immediate response, could subject the nation to weeks of chaos and martial law, said Rep. Brian Baird, D-Wash., a leading advocate of a constitutional amendment that would allow for the designation of temporary successors until elections can be held.

Unlike the House, Senate vacancies can be temporarily filled by appointments made by governors.

Sen. John Cornyn, R-Texas, last month reintroduced a proposed constitutional amendment that would give both chambers the legal authority to decide how to fill vacancies when one-fourth of their members were killed or incapacitated.