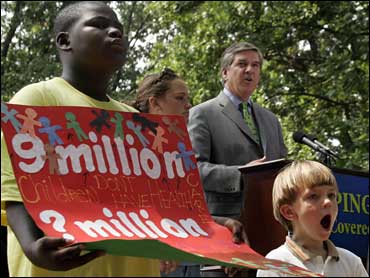 The House voted Tuesday to expand health insurance for children, but the Democratic-led victory may prove short-lived because the margin was too small to override President Bush's promised veto.

Embarking on a health care debate likely to animate the 2008 elections, the House voted 265-159 to expand the State Children's Health Insurance Program, or SCHIP, by $35 billion over five years. Bush says he will veto the bill due to its cost, its reliance on a tobacco tax increase and its potential for replacing private insurance with government grants.

SCHIP is a state-federal program that provides coverage for 6.6 million children from families that live above the poverty level but have trouble affording private health insurance. The proposed expansion, backed by most governors and many health-advocacy groups, would add 4 million children to the rolls.

The bill drew support from 45 House Republicans, many of them moderates who do not want to be depicted as indifferent to low-income children's health needs when they seek re-election next year. But most Republicans, under pressure from the White House and party leaders, sided with Bush, a move that Democrats see as a political blunder.

It hardly matters that the expansion would be expensive or a step toward socialized health care, Rep. Charles Rangel, D-N.Y., said during the House debate. When lawmakers go home, he said, "the question is, Were you with the kids or were you not?"

To overturn a presidential veto, both chambers of Congress must produce two-thirds majorities. The 159 House votes opposing the SCHIP bill should give Bush enough cushion to sustain his veto, as House leaders expect few members to switch positions.

The Senate appears poised to pass the SCHIP expansion by a large margin later this week, but a Senate bid to override a veto would be pointless if the House override effort falls short.

Despite the expected veto, many congressional Democrats welcomed the SCHIP debate as a way to open a second political front - in addition to Iraq - on which they feel Bush and his allies are out of step with voters. Rep. Rahm Emanuel, D-Ill., said the president willingly pours billions of dollars into the war but resists a significant expansion of a health program for modest-income children.

"It's no surprise the president finds himself isolated," Emanuel said at a Democratic event that included a Maryland mother who relied on SCHIP coverage when two of her children were badly injured in a car wreck.

Some Republicans agreed that the debate over a greater government role in health care will resonate far beyond Capitol Hill this week.

"This vote is huge for the next president, regardless of who it is," Rep. Jack Kingston, R-Ga., said in an interview during the floor debate. "I don't think anybody underestimates the philosophical importance."

Eight Democrats opposed the bill. Some, from tobacco-growing districts, object to raising the federal cigarette tax to $1 a pack, a 61-cent increase. Some Hispanic members complained that the bill would make legal immigrant children wait five years to qualify for SCHIP.

A Republican-controlled Congress and President Clinton created SCHIP in 1997 to provide health coverage for families with incomes too high to qualify for Medicaid but not high enough to pay for private coverage. Under the expansion proposal, states could seek federal waivers to steer funds to some families earning at least triple the official poverty-level income, provided the states showed progress enrolling the main target: children in families earning up to double the poverty rate. That would be $34,340 for a family of three, or $41,300 for a family of four.

The Bush administration says the legislation could qualify some New York families of four making about $83,000 a year, or four times the poverty level. Such a scenario is unlikely, the bill's proponents say, because it would require waivers the administration has rejected.

Bush proposes a smaller increase in SCHIP - $5 billion over five years - although some Republican lawmakers say he might agree to a larger increase later.

In a statement of administration policy Tuesday, the White House said the bill "goes too far toward federalizing health care." Republicans said a veto was certain. In his nearly seven years in office, Bush has vetoed three bills. One would have withdrawn troops from Iraq, and two would have expanded federal research involving embryonic stem cells.

SCHIP is set to expire Sunday. To avert that, congressional Democrats plan to extend it temporarily with a larger spending bill to keep the government running when the new fiscal year begins Oct. 1. The strategy would prevent Democrats from being blamed for letting the health program lapse by not reaching an accord with Bush, lawmakers said.

House Republican leaders berated Democrats for including several targeted spending items, known as "earmarks," in the 299-page SCHIP bill, which was not available for public review until Monday night. Democrats had declared the bill earmark-free. But Republicans found language directing funds to programs in Tennessee, California and Michigan.