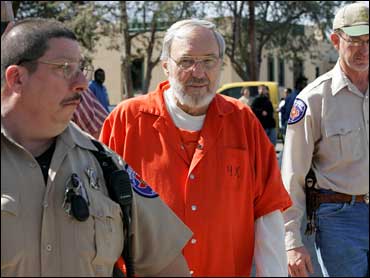 Behind guarded, ornate gates at the end of a rural road, a self-proclaimed prophet warns his followers about the end of time and rails against a dangerous and unclean world outside their West Texas compound.

The women are covered in long skirts and long-sleeve shirts. Many of the children have different mothers and share the same father.

But this isn't the Fundamentalist Church of Jesus Christ of Latter Day Saints' ranch, which authorities raided last month in Eldorado after receiving reports that underage girls were being forced to marry much older men.

This is the House of Yahweh: a different, even darker sect that the state has been investigating for years. Authorities in February charged the group's 73-year-old leader with performing polygamous weddings and forcing about 40 children - some as young as 11 - to work jobs at his 44-acre compound.

"If a bunch of adults want to get together and follow some con man and throw their lives away, that's their right in this country," said Callahan County District Attorney Shane Deel. "But to me, when you do that to children and they don't have a chance, that's where the biggest concern is."

If convicted on the most serious charges, Yisrayl Hawkins faces up to 20 years in prison.

Another sect leader, Yedidiyah Hawkins, goes to court this summer on charges of sexually abusing a teenager, bigamy and welfare fraud.

Questions have also been raised about at least two deaths within the sect.

A 7-year-old died in 2003 after her mother and another member performed home surgery on her infected leg. Both women were convicted of injury to a child.

And in 2006, a woman bled to death after giving birth because she was prevented from going to the hospital, according to a wrongful-death lawsuit filed by her husband.

Yisrayl Hawkins, who has pleaded not guilty in his criminal case, told The Associated Press that he and his church are misunderstood and persecuted because of their religious beliefs.

"We have nothing to hide," said the bearded, white-haired Hawkins, who declined to address specific allegations against him and his sect.

The House of Yahweh compound, about 120 miles northeast of the FLDS ranch, has wind generators, a cafeteria, a food-processing plant and dozens of tractor-trailer rigs holding canned goods. It also has a few stores carrying homemade toiletries and clothing.

Unlike the FLDS members who stay on the 1,700-acre ranch, most House of Yahweh followers live in mobile homes surrounding the sect's compound, which is occupied only by a few caretakers. Other members own homes nearby or live in trailer parks owned by Hawkins in Abilene.

"Anyone can come here and can leave at any time," Hawkins said.

After the April 3 raid on the FLDS ranch, Child Protective Services took more than 460 children into custody.

Child-welfare officials said they cannot comment on possible investigations of House of Yahweh members unless youngsters have been removed. Only one such case has occurred: Four children living in Yedidiyah Hawkins' home are now in foster care.

Yisrayl Hawkins was born Buffalo Bill Hawkins but legally changed his name. He founded the House of Yahweh in 1980 - three years after the former Abilene police officer was fired for having beer in his patrol car. The group moved to rural Clyde several years later so they would have room to celebrate weeklong Old Testament feasts.

Hawkins began preaching polygamy in the early 1990s, saying women had to accept it or leave and forfeit heaven, several former members said.

"It's definitely a cult that follows mind-control techniques," said Miryam Martin, a House of Yahweh member from 1986 to 2000. "So many people's lives have been destroyed by what's been going on over there."

But Tanah Hawkins, a member for 20 years, said its Scripture-based beliefs offer something missing in mainstream churches. She blames disgruntled former members for the criminal investigations.

"When people leave the House of Yahweh, they go out and feed the rumors and add more lies," she said. "But I actually pray for them."

Former members describe Hawkins as a zealot whose teachings are a blend of Old Testament directives on diet and cleanliness, New Testament beliefs in Jesus, and Hawkins' own prophecies rooted in the Book of Revelation.

Hundreds of his followers have legally changed their last names to Hawkins - including Yedidiyah and Tanah. Many have taken biblical first names that - like their leader's - include the letter "y."

Nowhere is his influence more apparent than in the sect's 1,200-seat warehouse-like sanctuary, where a dozen poster-size pictures of Hawkins adorn the front wall.

Worshippers must first remove their shoes, and feet and hands are then sprayed with disinfectant before they come in. Men and women are seated on separate sides of an 8-foot wall dividing the sanctuary. Women wear long clothing and veils for modesty, and everyone wears gloves for cleanliness.

Some authorities fear Hawkins will lead his group to a tragic end like David Koresh, who the government said urged his Branch Davidian followers to set their compound on fire and kill themselves in 1993, when federal authorities tried to end a 51-day siege. Survivors blame the deaths on federal agents.

Concerned about a similar confrontation, police did not arrest Hawkins until nearly three months after obtaining the warrant - when they spotted him driving through town.

Bail was initially set at $10 million, partly because of a perceived threat in a sermon.

"I'm not asking much out of you - I'm just asking that you be willing to die rather than leave this house," Hawkins told his congregation in November.

A judge later relented, and Hawkins was released on $100,000 bond after testifying that his security guards are unarmed and suicide is counter to the church's teachings.