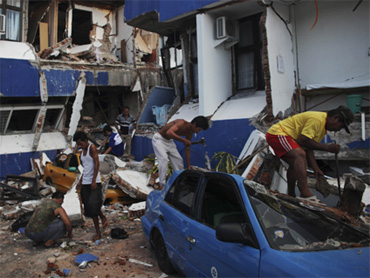 The House of Commons backed Prime Minister Tony Blair's determination to disarm Iraq, voting Wednesday to support his handling of the crisis and reject his opponents' assertion that the case for war is "unproven."

Blair prevailed despite a substantial rebellion within his Labor Party's ranks, mirroring the divisions which opinion polls have demonstrated in the wider British public.

Legislators voted 434-124 in favor of a government-sponsored motion that expresses support for working through the United Nations and urges Saddam Hussein to seize a "final opportunity" to comply fully with the Security Council's demands.

They rejected by a tally of 393-199 an amendment which said "the case for military action against Iraq (is) as yet unproven."

It was not immediately clear how many members of Blair's Labor Party opposed the government, but about 100 had signed the anti-war measure.

On the other side of the English Channel, French Prime Minister Jean-Pierre Raffarin warned that waging war now against Iraq without exhausting avenues for peace would split the international community and "be perceived as precipitous and illegitimate."

Addressing a debate on the Iraq crisis in the French parliament, Raffarin said France remains committed to continued and strengthened weapons inspections in Iraq.

"A military intervention today, when all the chances for a peaceful solution have not been explored, would divide the international community," Raffarin said in a speech, which was applauded by lawmakers.

"Let us make no mistake, it would be perceived as precipitous and illegitimate," he said.

Raffarin's remarks come a day after France, Germany and Russia submitted a proposal at the United Nations for step-by-step disarmament of Iraq, part of a European drive to counter U.S. pressure for military action.

That proposal is in direct competition with a resolution drafted by the United States, Britain and Spain, which says Iraq has failed to meet the disarmament requirements imposed by the Security Council in November. By alluding to "serious consequences" mentioned in the council's first resolution, the new draft would authorize war.

Raffarin said France would oppose that resolution, but did not say whether France would use its veto to block it or merely abstain in a vote.

To pass, the U.S.-backed resolution must have nine "yes" votes and avoid a veto by France, Russia or China, which has announced support for a French-Russian-German plan for enhanced inspections.

However, in spite of Russian diplomats' repeated vows to do whatever necessary to avoid war, a senior U.S. administration official said Wednesday that Moscow is unlikely to veto a the U.S.-backed resolution

Only Bulgaria is now considered in the U.S.-British-Spanish camp. The 11 other council members, to varying degrees, back continued inspections.

A vote on the U.S.-backed resolution, expected in mid-March, could well be influenced by chief inspector Hans Blix's next written report, due by Saturday, and by his appearance before the council on March 7 with U.N. nuclear chief Mohamed ElBaradei.

In other major developments: