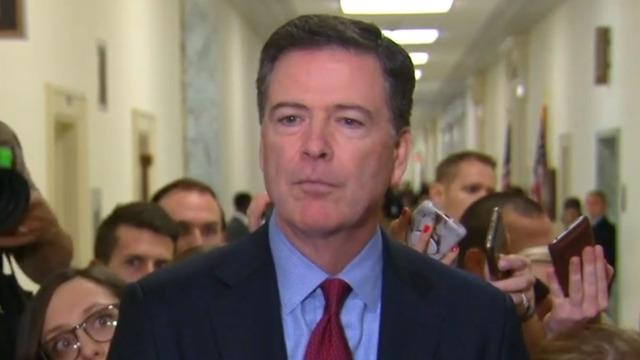 The House Judiciary Committee has released the transcript of former FBI Director James Comey's testimony in a closed session before the committee on Friday. Members of the committee questioned Comey about his role leading the FBI during the 2016 presidential election.

Comey was asked by Republicans about the involvement of former FBI agent Peter Strzok and Justice Department lawyer Lisa Page in Comey's decision not to prosecute Hillary Clinton for improper use of a personal email as secretary of state. President Trump has often fumed that Strzok, Page, Comey and Clinton are not the focus of an investigation. Strzok, who was involved in the special counsel investigation, was removed after anti-Trump texts between Strzok and Page came to light.

Democrats on the committee asked Comey more sympathetic questions. Although Republicans have blamed Strzok for trying to undermine Trump's candidacy, Comey said in the hearing that he found that characterization hard to believe.

"Peter Strzok helped draft my letter to Congress on October 28th that Hillary Clinton blames for her defeat. So it's hard for me to see how he was on Team Clinton secretly at that point in time," Comey said, referring to the Oct. 28, 2016, letter which stated that the FBI had "learned of the existence of emails that appear to be pertinent to the investigation" into the private email server that Clinton used as secretary of state.

"He also was one of the handful of people in the entire world who knew we were investigating four Americans who had some connection to Mr. Trump during the summer of 2016, and he didn't tell a soul. So it's hard to reconcile that with his being on Team Clinton," Comey added.

According to the transcript, Comey did not respond to some questions related to special counsel Robert Mueller's investigation into Russian interference in the 2016 election. Comey was advised by Cecelia Bessee, an attorney representing the FBI.

Comey denied a tweet from Mr. Trump earlier this month that said he and Mueller were "best friends."

"I admire the heck out of the man, but I don't know his phone number, I've never been to his house, I don't know his children's names," Comey said. He also criticized the president for attacking the FBI, saying that he was concerned citizens had been "lied to by the President and his supporters about the nature and quality of the Department of Justice and the FBI."

Republicans also questioned Comey about why Carter Page, a former Trump aide, was surveilled by the FBI under the Foreign Intelligence Surveillance Act. Rep. John Ratcliffe, R-Tex., could not get Comey to say whether the surveillance was authorized due to information from the Steele dossier. Many Republicans believe the Russia investigation stems from this unverified dossier. However, the FBI had past experience in dealing with Page, who had been targeted for recruitment by Russia's foreign intelligence service, which contributed to their surveillance of Page under FISA.

Comey confirmed in his testimony that the FBI's investigation into Russian interference in the 2016 election was not instigated by the Steele dossier. Comey said the basis for the probe was "the information we'd received about a conversation that a campaign foreign policy adviser (George Papadopoulos) had with an individual in London about stolen emails that the Russians had that would be harmful to Hillary Clinton." This conversation occurred before the FBI knew about the Steele dossier.

Comey told reporters Friday he would be returning to testify in a couple weeks, on December 17, and that it would likely again be closed testimony.

"When you read the transcript, you will see that we're talking about Hillary Clinton's emails, for heaven's sake. I'm not sure we need to do this at all, but I'm trying to respect the institution," Comey said about his testimony on Friday.

The committee had subpoenaed Comey, and he initially went to court to fight it. He decided to comply after the committee agreed to give him a full transcript of that testimony within 24 hours, which he is free to make public.

Comey's last appearance before lawmakers was 18 months ago, at a public hearing in June 2017. The hearing Friday represented an effort by House Republicans allied with President Trump to pin him down on issues important to them before Democrats take control of the majority in January.

Rep. Elijah Cummings, D-Md., who will head the House Oversight committee in the next Congress, told CBS News it is "hard to say" if his committee will continue to look into the fired director's actions in 2016. Cummings also promised to "spend the taxpayer's dollars" in an "appropriate" way.

Rep. Jerry Nadler, D-N.Y., said he will end this investigation — which is officially supposed to be examining DOJ and FBI actions in the lead-up to the 2016 elections — when he takes over the committee chairmanship in January.  He called it "a waste of time to start with" and said the "entire purpose of this investigation is to cast aspersions on the real investigation which is Mueller. There is no evidence whatsoever of bias at the FBI or any other of this nonsense they are talking about."