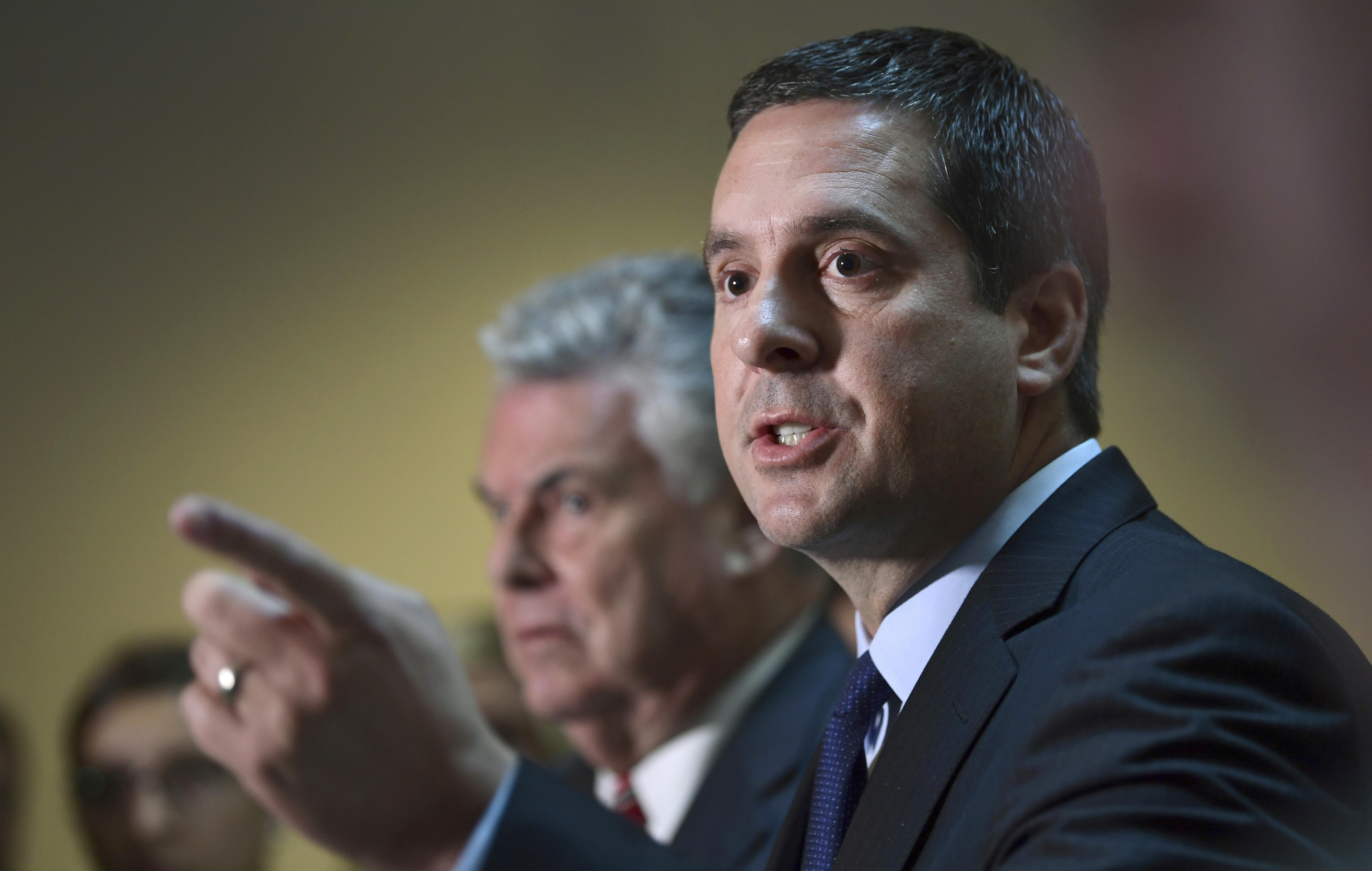 The House Intelligence Committee voted along party lines on Thursday to release a classified, Republican-drafted report summarizing the committee's findings following a year-long investigation into Russia's interference in the 2016 election. The report will now go to the intelligence community for a classification review and redaction, in a process that is expected to take several weeks.

The vote caps, but likely does not conclude, a highly publicized and increasingly acrimonious split between the committee's Democrats and Republicans, who agreed on virtually nothing about the investigation's methods, trajectory or conclusion.

In a statement issued Thursday, the Republican who had led the investigation, Rep. Mike Conaway, R-Texas, said, "It's now time for us to share what we've found, and move forward as one country, united against foreign aggression."

Democrats have been fiercely vocal in their opposition to Republicans' decision to end the Russia probe, to the conclusions they drew, and to the committee's decision to release what Ranking Member Adam Schiff, D-California, called a "fundamentally unserious" report.

In remarks following the committee's vote, Schiff said the minority requested that the meeting be conducted in open session, but that that motion, alongside about a dozen others to subpoena additional witnesses and documents, was rejected.

Last week, as they unilaterally announced an end to the investigation, Republicans previewed its findings – chief among them that the committee had found no evidence of collusion, coordination or conspiracy between the Trump campaign and Russia. The report also takes issue with some of the tradecraft underlying the January 6 Intelligence Community Assessment, which found with high confidence that President Vladimir Putin and the Russian government sought to help then-candidate Trump's election chances.

According to a seven-page, five-chapter summary of the Republicans' findings, "the Intelligence Community Assessment judgments on Putin's strategic intentions did not employ proper analytic tradecraft."

The report, many of whose conclusions Conaway has described as "non-controversial," includes some well-known, undisputed observations, including that "Russia conducted cyberattacks on U.S. political institutions in 2015-2016" and "Russian intelligence leveraged social media in an attempt to sow social discord to undermine the U.S. electoral process," according to the summary.

Among the conclusions more likely to be disputed by Democrats - in part because they featured in the contentious "Nunes memo" documenting alleged surveillance abuses by the FBI and DOJ that was released last month - are, "the dossier compiled by Christopher Steele formed an essential part of an application to the Foreign Intelligence Surveillance Court to obtain electronic surveillance on Carter Page." In their own memo, Democrats downplayed the centrality of the Steele dossier in the application and said DOJ officials had independently corroborated some of its contents.

In a section labeled "Campaign Links with Russia," another of the Republicans' conclusions reads, "When asked directly, none of the interviewed witnesses provided evidence of collusion, coordination, or conspiracy between the Trump campaign and the Russian government." Democrats have said Republicans' questioning of witnesses throughout the investigation was willfully cursory and shallow.

Among the summary's more critical observations of Trump associates is a conclusion that says the "Committee is concerned about [Carter Page's] seemingly incomplete accounts of his activity in Moscow." It calls contacts by some Trump campaign associates with Wikileaks, "ill-advised," but says there is no evidence that Trump associates were involved in the "theft or publication of Clinton campaign-related emails."

The summary largely absolves former Trump campaign manager Paul Manafort, and Trump associates Jared Kushner, Donald Trump, Jr., and Attorney General Jeff Sessions of any collusive activity. Is says Manafort was not involved with changing, in July 2016, the GOP platform toward Ukraine - adding that the party's position against Russia was made stronger, not weaker - and says Trump, Jr., Kushner and Manafort did not obtain derogatory information on Hillary Clinton from Russian sources they met with during the June 2016 Trump Tower meeting.

Also dismissed are concerns that have been raised about the Trump campaign's efforts to establish a "back channel" with Russia, arguing that those efforts suggest "the absence of collusion during the campaign, since the communication associated with collusion would have rendered such a 'back channel' unnecessary."

The summary includes a chapter on "Intelligence Community Assessment Leaks" and accuses former Director of National Intelligence James Clapper, of providing "inconsistent testimony" to the Committee about his contacts with the media. It says leaks of classified information "have damaged national security and potentially endangered lives," without elaborating.

Three pages of recommendations based on the summary's conclusions focus on bolstering responses to and disseminating information about cyberattacks, penalizing unauthorized disclosures of classified information, and, in one section, suggesting Congress repeal the Logan Act, which criminalizes the negotiation, with foreign actors, by unauthorized U.S. persons. Former National Security Advisor Michael Flynn is suspected some to have violated the Logan Act by discussing sanctions with former Russian ambassador Sergey Kislyak in December 2016. (No American has been convicted of doing so in the law's 200-year history).

A statement released by the committee's chairman, Devin Nunes, who stepped aside from the Russia investigation amid an ethics complaint that was later dismissed, said the report "presents the comprehensive results of what the Committee has learned during its fourteen-month-long investigation, and will be useful in thwarting any attempts by Russia or other foreign powers to further meddle in U.S. elections."

Schiff called Thursday's vote "a rather sad chapter" in the committee's history, and said that the meeting took place in secret session "for no reason at all, except a desire to avoid the public scrutiny of this decision to curtail an investigation into one of the most serious intrusions into our democracy in our history."

The California Democrat said the minority would continue interviewing witnesses and requesting documents on its own, and that it declined Republicans' offer to edit or add to their draft report. Instead, a document containing the minority's view will be introduced by next week, and released alongside the Republicans' report.

"When the majority made it clear they were going to take issue even with those fundamental conclusions at least as it pertained to Donald Trump, it was clear that their report was going to be completely political from beginning to end," Schiff said, "and there wasn't really much to work on in a joint fashion."

It is far from clear that the committee's Russia investigation has met its end. Earlier this week Democrats scored their first victory in keeping it alive when Cambridge Analytica whistleblower Christopher Wylie - who informed multiple explosive reports about how the London-based data firm, which was hired by the Trump campaign, misused Facebook data during the 2016 election - agreed to Democrats' requests that he testify before and provide documents to the committee. Democrats also extended an invitation to Aleksandr Kogan, a professor accused of wrongly supplying data harvested from Facebook to Cambridge Analytica, to testify. It is not yet known whether he has accepted the offer.

Some Republicans on the committee have signaled their openness to participating in additional witness interviews and evaluating new evidence, if it comes in. None has firmly ruled out the possibility that some of the Republican report's current conclusions could be updated or even reversed.

"If new information becomes available," he added, "then we shall see."