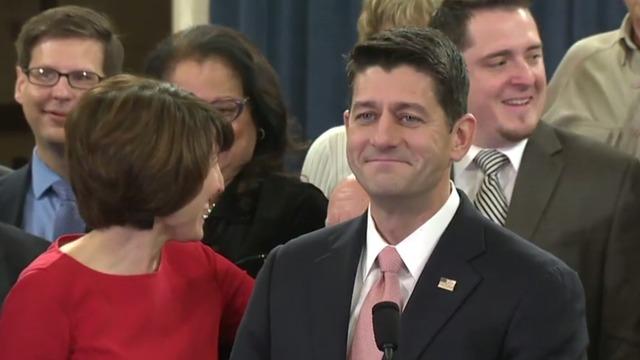 House Republicans on Friday quietly made changes to their far-reaching tax overhaul: Now its tax cuts would be less generous for many Americans.

A day after the GOP unveiled its plan promising middle-class relief, the House's top tax-writer, Rep. Kevin Brady, R-Texas, released a revised version of the bill that would impose a new, lower-inflation "chained CPI" adjustment for tax brackets immediately instead of in 2023. That means more income would be taxed at higher rates over time — and less generous tax cuts for individuals and families.

The change, posted on the website of the Ways and Means Committee, reduces the value of the tax cuts for ordinary Americans by $89 billion over 10 years compared with the legislation released with fanfare Thursday.

As wages rise, middle-class taxpayers would have more of their income taxed at the 25 percent rate instead of at 12 percent, for instance.

"The bill's like a dead fish: The more it hangs out in the sunlight, the stinkier it gets," Senate Democratic Leader Chuck Schumer pronounced after word of Brady's change. "The more people learn about this bill, the less they're going to like it."

House Minority Leader Nancy Pelosi blasted the tax bill unveiled by House Republicans as "a terrible assault on opportunity for the middle class" and said her GOP colleagues are "taking American people for suckers."

The change to the plan frees up money for Brady, the committee's chairman, to use to address concerns by lawmakers when changing the bill further next week. The Ways and Means panel begins work on Monday, a final bill-writing process expected to take four days.

Brady on Friday called it "a challenge of a lifetime legislatively."

President Trump and the Republicans are driving to push through a major tax-cutting bill this year to secure a legislative accomplishment, following their stinging failure to overturn and replace the Obama health care law. The Republicans, facing increasing pressure to produce a marquee legislative victory before next year's elections, are promoting their tax plan as a spark for economic growth and a boon to the stressed middle class.

Brady, in a statement releasing the revised bill, stressed "pro-growth tax reform that will deliver more jobs, fairer taxes, and bigger paychecks for people across our country."

While Mr. Trump and House Republican leaders stand united behind the plan, rank-and-file GOP lawmakers are divided and complaining about its potential blow to homeowners and the loss of a prized deduction that especially hits high-tax states.

And Mr. Trump is pressuring Republicans to repeal a health-care law penalty in the tax rewrite, a step that Brady indicated is politically problematic. Some of the GOP lawmakers agree.

Brady said Friday the president had spoken to him twice by phone and once in person, imploring him to scrap the so-called individual mandate that requires Americans to obtain health insurance or face a penalty.

"The president feels quite strongly about including this at some step," Brady said in an interview with Politico.

The Congressional Budget Office has estimated that repealing the individual mandate would save $416 billion over a decade. That's because without it, fewer people would enroll in Medicaid or buy federally subsidized coverage on insurance exchanges. The money represents a tempting revenue source for GOP tax writers whose plan for extensive tax cuts would add an estimated $1.5 trillion to the nation's debt over 10 years.

An influential conservative lawmaker, Rep. Mark Meadows, R-North Carolina, said Friday that repealing the health care mandate needs to be part of the tax bill. He said he believes a majority of Republicans in the House share that view.

Trump even tweeted on Wednesday: "Wouldn't it be great to Repeal the very unfair and unpopular Individual Mandate in ObamaCare and use those savings for further Tax Cuts for the Middle Class."

But Brady pointed out the Senate has been unable to muster enough votes for any health care legislation. "There are pros and cons to this. Importing health care into a tax reform debate does have consequences," he said.

And Rep. Tom Cole, R-Oklahoma, said, "I think the attitude is let's not mix up health care with this."

Republicans have set an ambitious timetable for the first revamp of the nation's tax code in three decades, one that would touch virtually all Americans and the economy's every corner, mingling sharply lower rates for corporations and reduced personal taxes for many with fewer deductions for home-buyers and families with steep medical bills.

Under the plan, the bulk of the tax cuts go to businesses instead of individuals, according to a budget watchdog group. The Washington-based Committee for a Responsible Federal Budget says corporations and other businesses get tax cuts of about $1 trillion, with the rest for individuals and people inheriting multimillion-dollar estates.

Democrats kept up their rhetorical battle against the plan, which was crafted by White House officials and Republican leaders in Congress in closed-door sessions over much of this year.

"Get real. Don't tell the middle class this is for them," House Democratic Leader Nancy Pelosi admonished Republicans as she spoke in a press conference. "You've set a banquet for the wealthy and corporate America and thrown a few crumbs" to the middle class. "It's really making suckers of the American people."

The tax plan also would increase the national debt, a problem for some Republicans.