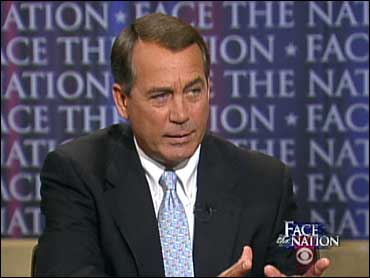 House Republican leaders are urging their rank and file to oppose the economic stimulus bill heading for a vote on Wednesday, delivering their appeal hours before President Obama heads to the Capitol to seek bipartisan support.

"We're anxious to help him," the Kentucky Republican said of Mr. Obama Tuesday morning. "Frankly, the biggest problem is with his own party, the Democratic Party, which seems to be drifting away from what he said he wanted, which is a package that is at least 40 percent tax cuts and earmark free."

"We think the country needs a stimulus," McConnell said on NBC's "Today" show. But he also said that he believes most people do not believe it will be accomplished through projects like "fixing up the mall."

While Mr. Obama is making good on his promise to hear from Republicans, the unanswered question remains as to whether the new Democratic president will actually listen to GOP concerns about the amount of spending and the tax approach - and modify his proposal accordingly.

With the economy worsening, Mr. Obama was making his first trip to Capitol Hill since his swearing-in last week for two private afternoon sessions Tuesday with House and Senate Republicans.

"The goal is to seek their input. He wants to hear their ideas," White House press secretary Robert Gibbs said. "If there are good ideas - and I think he assumes there will be - we will look at those ideas."

The recession is killing jobs at an alarming pace, with tens of thousands of new layoffs announced Monday by some of the biggest names in American business - Pfizer, Caterpillar and Home Depot.

Looking ahead, economists predicted a net loss of at least 2 million jobs - possibly more - this year even if Mr. Obama's $825 billion package is enacted. Last year, the economy lost a net 2.6 million jobs, the most since 1945, though the labor force has grown significantly since then.

The job losses are now coming from every corner of the economy, reports CBS News correspondent Anthony Mason.

The unemployment rate, now at a 16-year high of 7.2 percent, could hit 10 percent or higher later this year or early next year, under some analysts' projections.

Under the Obama team's watchful eye, the Democratic-controlled House and the Senate are in the midst of modifying the package that melds new government spending with a series of tax cuts. It seems to grow with every turn as it wends its way through Congress, and it's likely to be the largest single piece of legislation ever, once it ends up on Mr. Obama's desk. He wants it ready to sign by mid-February.

As Senate committees prepared to take up the measure and the full House got ready to vote on it this week, the Congressional Budget Office released an analysis that found that Mr. Obama's plan would flow into the economy a little more slowly than he predicted.

At this point, two-thirds of the package consists of new spending on everything from unemployment aid to construction projects while the rest is tax cuts for both individuals and businesses. Republicans are griping that the price tag is too high because of nonessential spending and that the tax provisions are flawed.

Mr. Obama's meetings come as the Federal Reserve examines unconventional ways to lift the economy, and one day after several companies, including Sprint Nextel Corp., Home Depot Inc., and General Motors Corp., announced sweeping job cuts as they seek to remain solvent in an economic environment that worsens by the day amid turmoil in the financial, housing and credit sectors.

Given the gravity of the economic situation, the stimulus measure is widely expected to pass Congress with bipartisan support. The question is just how many Republicans will side with majority Democrats to pass it.

Mr. Obama already has had one early victory, persuading Congress to give him the second installment of the $700 billion financial industry bailout money - and that was before he even got into office.

But the stimulus package presents a huge opportunity for the president, who was elected in part by his call for a new-style politics that emphasizes solutions over partisanship to change the way frequently gridlocked Washington works. Getting a significant number of Republicans to back the measure would be a triumph for Mr. Obama that would set a bipartisan tone for his presidency and signal that he values Republican ideas - and is willing to give a little to get a little.

For all his courting of Republicans and promises to listen to their ideas, Mr. Obama has made clear that it's his vision that will guide the country.

"I won" the election, he told Republicans on Friday when pressed about his tax policy - a comment both the White House and GOP leaders described as lighthearted, though also matter-of-fact.