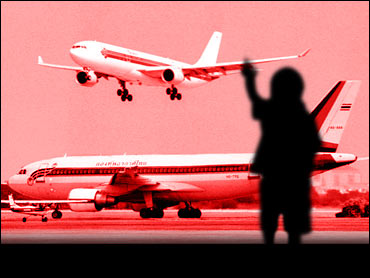 People who shine laser pointers at airplanes could face up to five years in prison under legislation approved Tuesday by the House.

The use of cheap, handheld laser pens "presents an imminent threat to aviation security and passenger safety," said House Judiciary Committee Chairman John Conyers, D-Mich., before the voice vote to approve the measure.

Rep. Ric Keller, R-Fla., sponsor of the legislation, said that since 1990 the Federal Aviation Administration has reported more than 500 incidents of pilots being blinded or disoriented by laser beams.

Keller held up a laser pointer he said could be purchased for $12 at Staples that he said had the power to cause vision problems for pilots from a distance of two miles.

The National Transportation Safety Board has documented two instances in which pilots sustained eye injuries and were incapacitated during critical phases of a flight.

Last year, a 39-year-old man from Parsippany, N.J., was sentenced under a provision of the USA Patriot Act to two years of probation for shining a laser pointer at a landing airplane, causing both pilots to briefly lose night vision. The plane, carrying six passengers, was at an altitude of about 3,000 feet when the beam hit the cockpit window. The plane landed safely.

The man's lawyer argued that his client had no ties to terrorism and should not be subject to provisions of the Patriot Act.

While most incidents of laser blindings have been linked to pranksters, law enforcement agencies have cited evidence that terrorists have explored using lasers as weapons.

A similar bill passed the House in the last session of Congress, but was not taken up by the Senate.