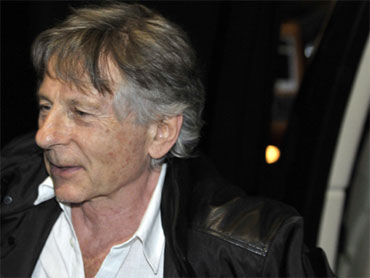 The film director Roman Polanski, free after nine months of detention, arrived Saturday at the Montreux Jazz Festival in his first public appearance since being released this week from house arrest.

Polanski, 76, arrived Saturday evening in a sport utility vehicle with tinted windows. When he emerged, he brushed his fingers through his hair - a trademark gesture - then was ushered into an elevator. Security personnel protected him from an eager crush of photographers.

Polanski's wife, the actress and singer Emmanuelle Seigner, performed shortly after his arrival, wearing a flannel shirt, a black hat and jeans.

"That was the theme to 'Rosemary's Baby,'" she said after her first song - a reference to the 1968 film directed by Polanski.

The Oscar-winning director was freed Monday from house arrest when the Swiss government refused to deport him to the United States.

He still faces an Interpol warrant in effect for 188 countries for a 1977 child sex case.

Swiss authorities allowed him to spend most of his detention at his chalet in the Swiss mountain resort of Gstaad.

In an interview Saturday with Swiss television, excerpts of which were broadcast on France-2 television, Polanski thanked "the millions of people who kept sending me messages of support during those nine long months."

"I would also certainly thank my wife Emmanuelle (and) my children, without whom I would have never been able to hold onto my dignity and perseverance," he said.

"For the moment, I'm happy to be free and to be able to do the things I was kept from doing," he said.

He said his son cut off the electronic bracelet that Swiss authorities had required him to wear while he was under house arrest.

"They told me to throw it away, that's it," Polanski said of the authorities. His son "couldn't stand it anymore," so he was given "the privilege" of removing the tracking device.