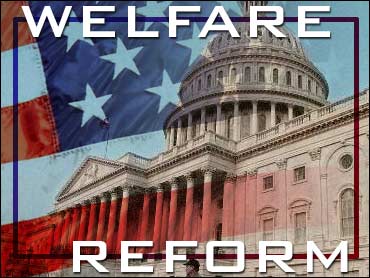 The House approved Republican a welfare reform bill Thursday that would require more single mothers to work and provide hundreds of millions of dollars to promote marriage.

Nearly identical to a plan put forth by President Bush, the GOP legislation passed by a 230-192 vote, largely along party lines. It would renew a 1996 welfare overhaul that allowed states to impose tough new rules and sparked a massive reduction in welfare rolls.

Members of both parties declared the 1996 overhaul a success, even as they differed sharply on what steps are needed to further help the poorest Americans.

The bill puts strict limits on the amount of time most welfare recipients can spend in education and training programs and limits people to five years of benefits over their lifetimes. It continues to ban legal immigrants from aid programs, provides $16.5 billion a year for states to run their programs and offers a modest increase in child care spending.

States would have to have 70 percent of people on welfare working 40 hours a week by 2007. Most welfare recipients would have to work three days a week in regular jobs or government-created workfare positions. The other two days could be spent in training, drug treatment and other programs.

Under current law, a welfare recipient may take vocational education courses for a year and still be counted as "working." That option is gone from the GOP bill.

Studies find that most people who have left welfare are working, earning more than they got from the government but not enough to escape poverty.

Republicans said the key to success was putting people to work.

Democrats said simply getting someone off welfare is not good enough and argued that education, training and access to child care are key to helping people earn a decent wage.

"Too many people are drowning in a sea of poverty," said Rep. Louise Slaughter, D-N.Y. "Welfare-to-work should not merely toss the poorest Americans a life preserver to help them float along."

The bill includes up to $300 million per year for experiments promoting marriage. It also extends a $50 million program promoting abstinence from sex until marriage, which bans any discussion of contraception.

Both programs have attracted strong opposition, with opponents saying neither has been proven effective. Some worry the marriage program could push people into bad marriages.

But House Democrats voiced few complaints about them Thursday, focusing instead on the central issues of welfare.

Since peaking in 1994, the number of families receiving monthly welfare checks has fallen by nearly 60 percent. The Bush administration said Thursday that the national total continued to fall through September, albeit by a tiny amount.

At the same time, the rolls are rising in more than half the states. And data released this week found that after several years on the rise, the portion of poor children with working parents fell in 2001.

The GOP bill was nearly identical to the welfare bill approved by the House last year. The Senate, where Democrats have a greater influence on legislation, failed to pass a welfare bill last year.

The 1996 law, which expired last fall, combined with a roaring economy to reduce welfare rolls. It has been extended several times to give Congress more time to act.

Republicans moved their bill directly to the House floor, skipping committee debate, where Democrats could have offered a variety of amendments. Democrats complained that the procedure choked off real debate but there was little they could do to stop it.

The House considered - and defeated - two Democratic alternatives to the Republican bill.

The first, sponsored by Rep. Ben Cardin, D-Md., was a moderate bill that increased money for child care, allowed more education and training and restored benefits to legal immigrants. That lost by a 225-197 vote.

The second - defeated 300-124 - was a more liberal measure, offered in memory of the late Rep. Patsy Mink, D-Hawaii. It would have provided even more money for child care and more money for states to run their basic programs. It would have allow states to continue benefits for people longer than five years if they are complying with welfare rules.