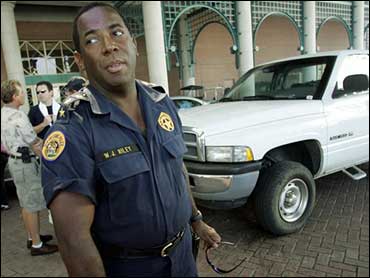 The government launched a crisis hotline Wednesday designed to help victims and emergency workers cope with the psychological aftereffects of Hurricane Katrina.

Officials said the line was started in anticipation of potentially widespread mental stress --potentially leading to suicide -- as first responders and evacuees begin to deal with the loss of property and loved ones or horrific scenes of suffering wrought by the storm and its aftermath.

"We have a focus on suicide prevention in the affected areas," Charles Curie, director of the federal Substance Abuse and Mental Health Services Administration (SAMHSA), told reporters.

Officials said recent disasters like the Oklahoma City bombing and 9/11 have shown that immediate psychological help is key for first responders confronting human suffering and death during rescue operations.

Stress reactions, depression, and problems sleeping and concentrating are common among emergency workers in the aftermath of disasters.

Those stresses were evident last week as two New Orleans police officers reportedly committed suicide on Monday, one reportedly after learning that his wife had died.

Officials said professionals are on the lookout for depression, suicidal behaviors, and substance abuse in emergency workers and victims coping with both mass devastation and personal loss.

"The pressure on [first responders] is intense," said Dan Dodgen, Ph.D., SAMHSA's emergency management coordinator. "They're a population that are particularly at risk because they're exposed to so much trauma."

Also last week, a United flight carrying eight storm victims from New Orleans to Dulles Airport in suburban Washington, D.C., was diverted when one of the passengers reportedly attempted suicide on board.

Officials said they were also in the process of moving some 210 mental health experts into clinics and shelters in affected areas to help treat newly homeless persons.

"Lots of disorders can be expected here" both in the short and long term after the storm, Insel said. Posttraumatic stress, depression, drug abuse, and ongoing anxiety are all risks that mental health workers will confront.

"Most people will recover completely," he said. "We are a resilient species."