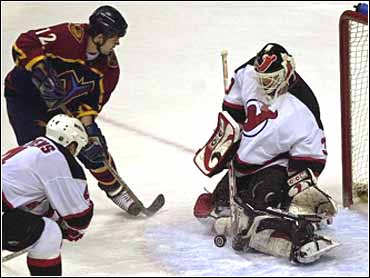 Holik looked at the opportunity to center for Patrik Elias and Sykora as an unanticipated treat.

"It's like when a dog is obedient and you give him a nice bone," Holik said. "This was one of those bones for me."

New Jersey coach Larry Robinson broke up his top line for the third period, replacing Jason Arnott with Holik. The move paid off as the revised trio clicked immediately.

"The coach felt the team needed a little shakeup," Holik said. "It's a different game to play with them."

Arnott refused to blow the demotion into a large-scale controversy.

"Larry wanted to shake it up a little," Arnott said. "If that's what it takes to win, then by all means do it."

Atlanta, 0-8-2 during its slump, got goals from Steve Staios and Yves Sarault.

The Thrashers, hard hit by the loss of Andrew Brunette to a concussion and Donald Audette to a suspension, don't have the depth to compensate for the loss of top offensive players.

"There is no question that when you take so many players out of the lineup, you are going to be outmanned," Thrashers center Ray Ferraro said. "When you are a new team, you might not have the depth."

The teams exchanged goals in the first period with New Jersey striking first on an unassisted goal by Sykora.

The Devils' right wing intercepted a pass from Atlanta's Patrik Stefan at the New Jersey blueline. Sykora broke away from the pack to beat Damian Rhodes at 7:38.

After the teams battled through a scoreless second period, the Thrashers took a 2-1 lead 26 seconds into the third period on the goal by Sarault. Ray Ferraro driled a hard shot from the left circle that Brodeur blocked. The rebound went right to Sarault on the right side for an easy score into a half-empty net.

Sykora connected again at 4:54 to pull New Jersey even at 2-2. Patrik Elias chipped the puck from behind the Atlanta net into the slot to Sykora who flubbed the shot. But the puck fluttered past Rhodes for Sykora's 15th goal.

Holik's goal came on a power play at 9:41. He beat Rhodes from the high slot as Turner Stevenson provided an effective screen.