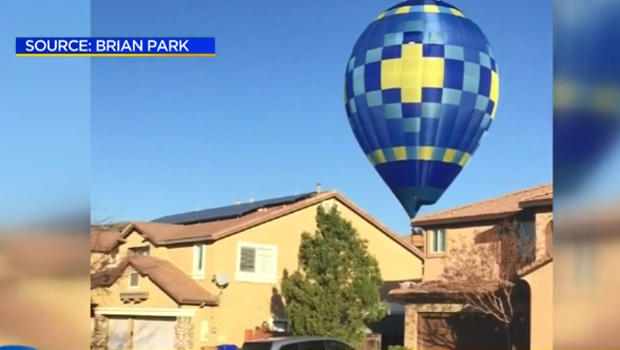 Two hot-air balloons have been grounded after getting dangerously close to the rooftops of homes in Yucaipa, California, east of Los Angeles Tuesday. The sheriff's department says several Chapman Heights homeowners called 911, worried there was about to be a crash in their neighborhood.

Homeowner Tony Lumsden told the station, "This shocked me. When I saw how low they were, I thought, 'Uh oh, there might be a problem."'

But he says the pilots seemed to be in control.

"I heard them talking, saying, 'Good morning,' talking to someone on the street. They didn't sound stressed."

Deputies told CBS Los Angeles they were able to contact the pilots and ask them to land.

Students at Yucaipa High School watched as one balloon headed toward their softball field.

"I was going outside to the bathroom and I just saw this blue basket thing, and I was really confused," said Charli Champman.

"All I remember was, 'Oh hi!' Everyone was waving. It was all fun," Sophia Sandoval said.

Students told CBS L.A. the deputies were yelling commands at the pilot over a loudspeaker.

"I guess what they would normally say in a pursuit: 'Stop, lower it,"' said Cheyenne Creamer. "Except it was a hot air balloon, so it was a little weird."

"I thought it was because they were running out of whatever they use (for fuel). But it was a safe landing, no one got hurt," Joseph Ammerman said.

There was no damage to the school or any of the homes the balloonists flew over.

Deputies say they will forward a report to the FAA to see if the pilots violated any flight rules.

The Sheriff's Department didn't release the pilots' name, only saying they were flying privately owned balloons for personal use.