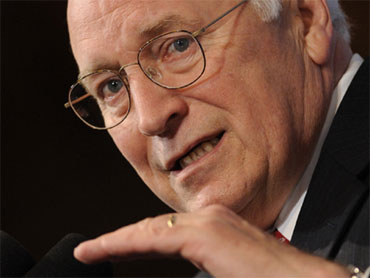 One of Dick Cheney's daughters said the hospitalized former vice-president could go home on Monday after receiving medication to treat a fluid buildup related to his aggressive form of heart disease.

A medical source confirmed to CBS News that the 69-year-old former vice president is responding to IV treatment and appears to be doing better.

The source warned, however, that the incident confirms Cheney's "tenuous cardiac status."

Cheney, who has had five heart attacks, was admitted to George Washington University Hospital on Friday after experiencing discomfort.

In that episode, Cheney underwent a stress test and a heart catheterization.

Liz Cheney told "Fox News Sunday" that her father is feeling better and hopes to be released on Monday.

A face of his party for decades, Cheney has remained a prominent voice of opposition to the Obama administration. His public career spanned decades, including service as a lawmaker, defense secretary and White House chief of staff.

Cheney had bypass surgery in 1988, as well as two later angioplasties to clear narrowed coronary arteries.

In 2001, he had a special pacemaker implanted in his chest. In addition, doctors in 2008 restored a normal rhythm to his heart with an electric shock.

It was the second time in less than a year that Cheney had experienced and been treated for an atrial fibrillation, an abnormal rhythm involving the upper chambers of the heart.