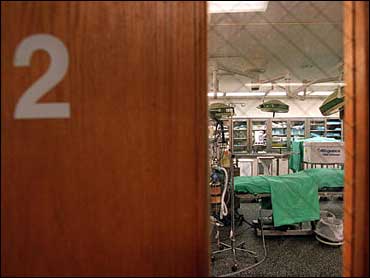 Deaths linked to hospital infections in 2000 were 14 percent higher than the federal government estimated, and nearly 75 percent of the deaths could have been prevented, a newspaper reported.

About 103,000 deaths were linked to hospital infections, 13,000 more than the Centers for Disease Control and Prevention calculated last year, according to a report in Sunday editions of the Chicago Tribune.

Many of the deaths were caused by unsanitary facilities, germ-laden instruments and unwashed hands, the newspaper reported. Infection rates are soaring nationally, exacerbated by hospital cutbacks and carelessness by doctors and nurses, according to the newspaper.

Hospital infections are now the fourth leading cause of death in the United States, behind heart disease, cancer and strokes, according to the CDC.

Serious violations of infection-control standards have been found in the majority of hospitals nationally, the newspaper said. Since 1995, more than 75 percent of all hospitals have been cited for serious cleanliness and sanitation violations.

Hospital cleaning and janitorial staffs are overwhelmed and inadequately trained, resulting in unsanitary rooms or wards where germs have thrived, the newspaper said. And payroll cutbacks have gutted staffs devoted to reducing infections.

In 1998, eight children died of an infection that spread from a Chicago pediatric medical center to a hospital. The flulike outbreak was halted months later after three dozen sick health care workers were ordered to stay home.

At Loyola University Medical Center in Maywood, Ill., a doctor dropped a surgical glove on a dirty floor, picked it up, put it on his hand and changed the bloody dressing on the open wound of a burn patient.

In Detroit, infections killed four babies in 1997 as doctors and nurses moved about the pediatric intensive care unit without washing their hands, according to court records and interviews. It took two months for administrators to close the nursery for cleaning.

Staphylococcus bacteria inside a West Palm Beach, Fla., hospital infected more than 100 cardiac patients, killing 13, according to court records. The survivors underwent painful and debilitating surgery, as rotting bone was cut from their bodies.

At Bridgeport Hospital in Connecticut, germs flourished in areas that are supposed to be the most sterile, according to a review of hospital records collected in a lawsuit. The case involved four patients who contracted infections in late 1996 and early 1997. The paper said one operating room was often contaminated by dust because of faulty ventilation. Flies buzzed overhead during operations and doctors wore germ-laden clothes from home. Many did not wash their hands before operating, the paper said.

To document the rising rate of infection-related deaths, the newspaper analyzed records from 75 federal and state agencies, as well as internal hospital files, patient databases and court cases around the country.

CDC officials said they believe most hospital infections are preventable, but the agency has not arrived at a precise number.

The American Hospital Association said the last decade of unprecedented cost-cutting and financial instability has impacted all areas of hospital care.

"It's also a question in front of society: How much do you want to invest in high-quality, safe medical care?," said Wade.