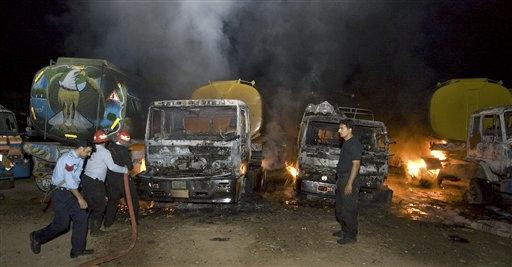 Perhaps you've heard the story about Maggie the elephant, the pudgy pachyderm at the Alaska Zoo who, in order to lose weight, will get a treadmill.

If it all sound a little wacky, you should know that treadmills are already in use for horses. Yes, horses. The Early Show resident veterinarian Dr. Debbye Turner got to witness it firsthand for this week's Pet Planet.

In the heart of Bluegrass Country, there is a sense of timelessness, a natural order, a feeling that some things are just meant to be. Horses exercise in the great outdoors.

People exercise on treadmills. So while an image of human legs exercising inside a gym looks perfectly natural, the image of hoofs on a treadmill looks downright weird, at least at first glance.

At the Rood-Riddle Equine Hospital in Lexington, Ky., horses have hit the gym.

"Right now, he is on auto-pilot with his muscles," says Leonie Seesing about a horse. She runs a company called EquiGym, which sells treadmills to veterinary hospitals and universities.

While part of its purpose is to provide a workout, the treadmill also allows trainers a high-tech way to measure speed, agility and heart rate, in a controlled setting, something they can't get outside. They can also simulate climbing at angles up to ten degrees.

A horse plugging away on a raised treadmill may look bad for the horse, but that is not so. "He's just climbing a hill," Seesing says, "Naturally, they prefer to jog up a hill. Maybe not that slow."

No, of course not that slow. What was she thinking? As they pick up speed, the horse starts trotting fast without a problem. And yet, when most horses meet the treadmill for the first time, it's a tough sell.

But soon they get the hang of it, although occasionally it takes a wee bit of tough love.

Watching them gallop, Dr. Brett Woodie, a horse surgeon, says he was nervous for the horse. "You bet. It makes you think if this horse were to take a bad step, stumble, they could possibly injure themselves."

If Dr. Woodie sounds like a critic, he's not. In fact, he says the treadmill provides a valuable medical tool.

By raising the heartrate, and inserting an endoscope, which is a camera at the end of a long tube, it makes diagnosing respiratory problems much easier.

Dr. Woodie explains, "We're watching to see if there's any evidence of lameness, see if they're making any abnormal respiratory noise."

Asked if he learned this in veterinary school, he says, laughing, "No. No. Where I went to school, we didn't have a treadmill." But adds this technology is "super" for him to do his job.

As for the concern that one bad step could lead to disaster, Seesing says, "I have never had one fall on the machine, and especially not while it's moving. If I get 'em very tired, they will stumble at times. You've got to see the signals. When they start to come back to you, they'll tell you. Their body language tells you."

The horse on the treadmill, for example, was telling her with his body language that he's a happy camper, Seesing says.

Not all horses are so gleeful, especially those undergoing the medical exams, like an 8-year-old named Everest, even when a treadmill run is followed by a nice cold shower.

Still, thoroughbreds are born to run and run fast. And when they do it on a treadmill, they reach speeds that can take your breath away.

While it may be frightening to look at, these horses seem to take it all in stride.

And while it may seem like a novelty, these horse treadmills really do help veterinarians.

As for Maggie the elephant, that treadmill should be ready by late summer. Her caretakers are hoping she'll be able to shed 300 pounds. She currently weighs in at 9,100 pounds.