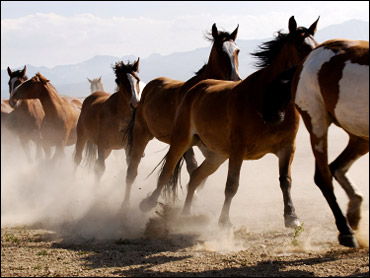 (AP) ALBUQUERQUE, N.M. - A group of horse owners and clubs is urging the governor to support a proposed horse slaughterhouse in Roswell, saying the closing of domestic facilities five years ago has caused "needless suffering under the cruelest of conditions."

"Horses deserve better than to be abandoned, starved, or transported long distances in overcrowded trucks to slaughter in foreign countries," the letter from council President Rusty Cook said, noting rescue facilities are unable to care for all the unwanted horses.

Gov. Susana Martinez and a number of equine and animal humane groups have been vocal opponents of the plan by a businessman to open what could be the first horse slaughterhouse in the country since Congress restored funding for inspections of such plants. Another application is pending for a plant in Missouri, USDA officials said.

Martinez spokesman Scott Darnell said the governor received the letter, but her opposition to the facility has not changed.

Meantime, Valley Meat Co. owner Rick de los Santos said he has hired an attorney and is working with Sen. Jeff Bingaman, D-N.M., and Rep. Steve Pearce, R-N.M., to push for action from the USDA on his application to convert his former cattle slaughterhouse into a horse slaughter plant that would package meat for sale overseas.

He said the USDA initially told him last year that it would move quickly on his application, but he has since been told that because of the controversy over domestic slaughter, the agency won't make a decision until after the election. His business, he said, is now sitting idle because horses cannot be slaughtered in the same facility as other animals under USDA rules.

"They have turned it into a political game instead of food safety," he said.

The USDA said its Food Safety and Inspection Service is currently reviewing the applications from New Mexico and Missouri.

The Food Safety and Inspection Service said in a statement it "has determined that despite the congressional decision to lift the ban, the agency will require a significant amount of time to update its testing and inspection processes and methods before it is fully able to develop a future inspection regimen."

Cook estimates some 1,000 horses are shipped through New Mexico to Mexico every month for slaughter south of the border.

She said the proposed slaughterhouse in Roswell should be supported.

"Not only would it help to solve the current overpopulation of horses, but it would provide considerable economic benefits to our state in the form of jobs and production of usable products such as meat, dog food, and glue for sale in both domestic and foreign markets," she wrote to the governor.