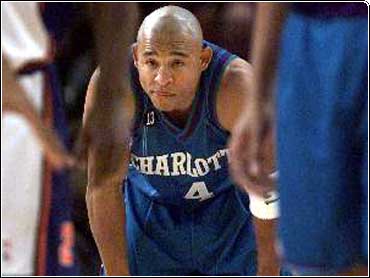 Charlotte Hornets guard David Wesley said Wednesday night he expects to be haunted for the rest of his life by the car crash that killed teammate Bobby Phills.

"Every day. Every night," Wesley said in his first interview since the Jan. 12 wreck. "From people that I've talked to, they say it doesn't go away. The pain lessens, but there probably won't be a day that I won't think about it."

Speaking to a group of reporters after the Hornets' 92-85 loss to the Los Angeles Lakers, Wesley patiently answered questions about an accident that police say occurred as the two best friends were drag racing.

Wesley and Phills had just left a shootaround at the Charlotte Coliseum and were driving their Porsche coupes at speeds in excess of 100 mph when Phills, driving behind his teammate, lost control of his car. He slid into oncoming traffic and was struck in the driver's side door, killing him instantly.

Wesley and the rest of Charlotte's players and coaches stayed at the crash site for several hours, trying to console each other while waiting for police to finish their on-scene investigation and extricate Phills' body from his mangled car.

Wesley, who has been charged with two misdemeanor traffic offenses, said his mission now is to try to cope with the heartache of losing someone with whom he shared so much.

Wesley said he has made one significant change since the crash. Usually one of the Hornets' most outgoing players, he has found himself shying away from fans. Some of them, Wesley said, have showered him with what he described as less-than-supportive remarks.
$ As a result, he is signing less autographs and talking to less members of the public, two practices he hopes to eventually change.

"Not all fans are for me," he said. "I've had to deal with some different comments. I don't know if people think it's funny or it's taking my mind off the game or they're trying to get to me or what."

At several stages during the interview, Wesley paused, took a deep breath and exhaled slowly as he gathered his thoughts.

One such instance came when he talked about the support he has received from members of Phills' family, including his parents and his widow, Kendall. Phills' family members have told him they don't blame him for the fatal crash, Wesley said.

"I think we're just trying to be a big support group for each other, really," he said.