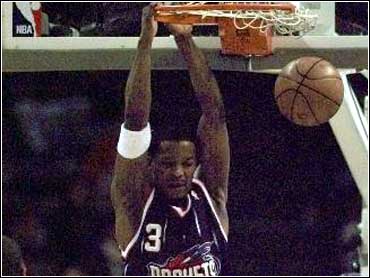 Call it a case of poor timing by the Houston Rockets.

On a night when the Rockets came up with a rare solid performance on the road, it was canceled out by the best games of the season from Charlotte's Derrick Coleman and Anthony Mason.

Coleman had the highest-scoring output in his two years with the Hornets and Mason had a triple-double to help Charlotte to a 102-97 victory Tuesday night.

"I just got into a rhythm, and my teammates noticed it and kept getting me the ball," said Coleman, who flirted with his first triple-double since 1994 but wound up with 32 points, 12 rebounds, five assists and three blocks. He made 14-of-22 field-goal attempts as Charlotte won for the sixth time in eight games.

"Coleman was just phenomenal," Houston coach Rudy Tomjanovich said. "He's one of the most talented guys in the league. He can shoot from the outside, in traffic, can handle the ball and pass. He just has all the tools. We left him wide open and he was the hottest guy on the floor in crunch time."

Just for good measure, Coleman stopped to do a live national television interview on his way to the locker room after a first half in which he had 19 points, eight rebounds and four assists.

A large part of the reason for Coleman's success was Mason, who spent much of the night feeding the ball to him.

"The two of us have been working on a lot of things," Mason said, "and it's been working real fluidly. Hopefully I can get that going with some other players, too, but right now Derrick and I are working a nice 1-2 punch."

Mason had 12 points, 11 assists and 10 rebounds for his fifth career triple-double. David Wesley added 21 points to help Charlotte send Houston to its sixth consecutive loss on the road.

Steve Francis had 24 points and Kenny Thomas 20, but it wasn't enough to prevent Houston from losing for the sixth time in eight games. The Rockets missed 20 of 28 3-point attempts but still wound up shooting 49 percent.

"We can't put a big negative on this game," Tomjanovich said. "There were a lot of good things that happened. We had a nice lead, but then we couldn't make the shots when we needed."

"I thought we did an excellent job of stopping Eddie Jones," Francis said, "but Anthony Mason and Derrick Coleman played well. We didn't grab it. We didn't take advantage of the opportunity."

There were three ties and two lead changes in the fourth quarter before Wesley's driving layup put Charlotte up 91-89. After a missed 3-pointer by Matt Bullard on the other end, Wesley fed Coleman for a 3-pointer that pushed the Hornets' lead to five with 2:26 remaining.

The Rockets missed three of their next four shots, allowing Charlotte to stretch it to 98-91 on Coleman's dunk with 25 seconds left. Houston made the final margin close by making a pair of 3-pointers in the last 18 seconds.