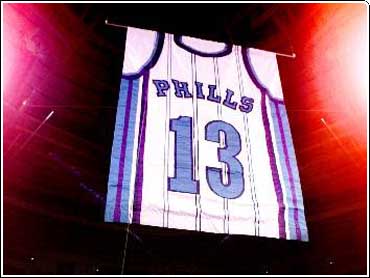 The Charlotte Hornets gave fallen teammate Bobby Phills their highest honor Wednesday night by retiring his jersey and hoisting it into the rafters of the Charlotte Coliseum.

Teammates and family members fought away tears at the end of a 10-minute ceremony as Phills' brother, Dwayne, perched the player's 3-year-old son, Bobby Ray Phills III, on his shoulders. The youngster pulled on a rope that raised his father's white jersey and No. 13 to its permanent home in the Charlotte Coliseum's rafters, 100 feet above the playing surface.

The boy was wearing a jersey bearing his father's number and sporting "R.I.P. DADDY" where players' names are usually inscribed.

It was the first jersey retirement in the franchise's 11-year history.

Phills, the Hornets' co-captain, died Jan. 12 in a traffic accident near the coliseum. Police say Phills was racing teammate and close friend David Wesley at speeds in excess of 100 mph when he lost control of his car and crashed. Phills was killed instantly; Wesley faces two misdemeanor traffic charges.

Even though Phills died nearly a month ago, the Hornets scheduled the ceremony for Wednesday night because the opponent was the Cleveland Cavaliers. Phills spent his first six NBA seasons playing for Cleveland before signing a seven-year, $33 million contract with Charlotte. He was in his third season with the Hornets at the time of his death.

The ceremony included a video tribute and the presentation of a $135,000 check by his Charlotte teammates to the Bobby Phills Scholarship Fund. Framed jerseys were presented to Phills' widow, Kendall, and his parents, Bobby and Mary Phills.

Kendall Phills presented a $100,000 check to the scholarship foundation.

"Therefore Bobby's dream will never be retired," she said.