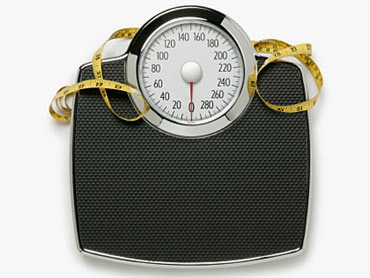 Weight regain is the bane of many a dieter's existence. Often dieters who regain weight after losing it are viewed as failures and judged for their lack of willpower, but new research may put an end to this blame game.

Weight regain may not be solely a willpower issue. Some people may actually be programmed to gain weight back based on their levels of two key appetite hormones, leptin and ghrelin. The new study appears in an online version of the Journal of Clinical Endocrinology & Metabolism.

"This knowledge could be used as a tool to personalize weight-loss programs that could guarantee success in keeping off the weight," says study author Ana Crujeiras, Ph.D., of Compejo Hospitalario Universitario de Santiago in Spain, in a news release.

In the new study, 104 obese or overweight men and women ate a low-calorie diet for eight weeks and were followed up with six months later. Their body weight, ghrelin, leptin, and insulin levels were measured before, during, and after the diet.

On average, study participants dropped about 5% of their body weight while adhering to the low-calorie diet. Six months later, 55 people maintained their weight loss, while 49 regained 10% or more of the weight they had lost. Those individuals with higher leptin and lower ghrelin levels before dieting were more prone to regain weight, the study showed.

Their brains may not be getting the fullness or satiety messages that these hormones are delivering. You may have a lot of leptin, but your brain is resistant to its effects; much like people with type 2 diabetes become resistant to the effects of the hormone insulin.

Going forward, "these hormone levels could be proposed as biomarkers for predicting obesity-treatment outcomes," the researchers conclude. "Our findings may provide endocrinology and nutrition professionals a tool to identify individuals in need of specialized weight-loss programs that first target appetite hormone levels before beginning conventional dietary treatment."

Louis Aronne, MD, founder and director of the Comprehensive Weight Control Program at New York-Presbyterian Hospital/Weill Cornell Medical Center in New York, agrees. "There is something physical going on in people who regain weight," he says.

"Resistance to these hormones is a risk factor for weight regain," he says. Aronne dubs this condition "fullness resistance" and says that your brain is resistant to signals that come from your stomach and intestines telling you that you are full and to stop eating.

"With leptin resistance, you don't feel full and the more you eat, the hungrier you may get," he says.

"We need to stop blaming people and start recognizing the physical basis of weight regain and manage it so people do better," he says.

The new research likely applies to significant numbers of people who are finding the battle of the bulge to be an uphill one.

"We are getting down to some of the final choke points of our weight regulating system, and these should apply to large numbers of people," he says.

Drugs aimed at leptin resistance -- and there are some in the pipeline -- may help, he says.

"There's no question that most people who easily gain weight, and/or quickly regain weight after losing it are different from other folks," says Scott Kahan, MD, co-director of the George Washington University Weight Management Program in Washington, D.C., in an email. "The general public tends to think of 'fat' people as lazy and as having no willpower [but] it couldn't be further from the truth."

"Ample evidence, now including this study, suggests that there are physiologic reasons for weight gain, difficulty at losing weight, and rapid weight regain after a diet," he says. "There is no question that certain people are preconditioned to gain weight more easily and more quickly regain weight after dieting, just as some people are predisposed to having their blood pressure spike after eating salt whereas others can eat all the salt they want without having problems with hypertension," Kahan says. "This study is another small step toward ultimately ... [devising] new strategies for weight management and disease prevention that work with our bodies' physiologic makeup, rather than against it."
By Denise Mann, WebMD Health News
Reviewed by Laura Martin
© 2010 WebMD, LLC. All rights reserved