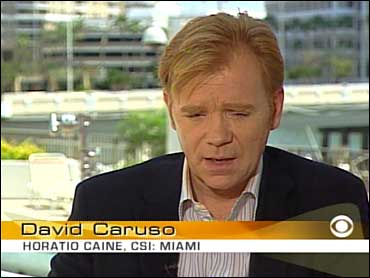 Thursday saw one of the most shocking and emotional episodes ever of the hit CBS drama, "CSI: Miami."

Horatio Caine's new wife, Marisol Delko-Caine, was gunned down by a drug syndicate, just days after finishing her cancer treatments.

The scenes weren't easy for David Caruso, who plays Caine.

"Those are always challenging scenes," he told The Early Show national correspondent Tracy Smith, "because, first of all, we have a terrific character and a terrific actress (Alana De La Garza) that we've lost, and that's always impactful. … This particular situation is pretty heartbreaking because she was on the rise and things were going well for her, and she was in remission, and these series of events have taken her away."

For a show that is mainly about science, it was an emotional development that Caruso was ready for, Smith observes.

"In terms of this world and any opportunity as a performer, you want these challenges," he said. "You want there to be this much riding, and you want the types of scenes that we've had in the last two episodes to keep you up at night. You're not sleeping before you have a big sequence. … And the fear it raises and the pressure that it puts on you are good things, because you will bring all of that with you."

"And you really didn't sleep before this scene?" Smith asked.

"When you have these sequences floating around — once you begin the grind on the sequence — in other words, you begin to work it in your head, begin to scope the moments in your head, they're tough to put down," he said. "The other side of it was Alana was so fantastic in the scenes that I literally had to allow her to set the tone and, as I say, react and support her. She was amazing."

But De La Garza says she knew the minute they announced the wedding that her days on the show were numbered: "It was the big joke around. I've been telling everybody that they were like, 'Oh, my Gosh, you're getting married, so when do you think you're gonna die? Wonder how she's going down.'

"It was always like, 'Is it this script (in which she meets her demise)?' " she said to Smith with a laugh, pretending to open a script.

Next week's season finale of "CSI: Miami" will finally reveal who the mole is who's been leaking information from the CSI lab.

Classroom Of The Future? No Chairs!