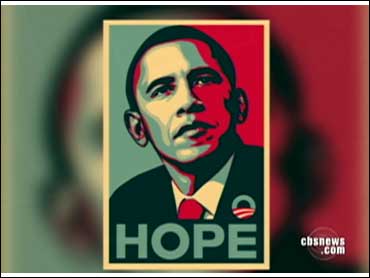 The artist who designed the famous Barack Obama "HOPE" poster has admitted he didn't use the Associated Press photo he originally said his work was based on but instead used a picture the news organization has claimed was his source.

Shepard Fairey, a Los Angeles-based street artist with a long, often proud history of breaking rules, said in a statement Friday that he was wrong about which photo he used and that he tried to hide his error. It was not immediately clear whether he would drop his lawsuit against the AP over the use of the photo.

"In an attempt to conceal my mistake, I submitted false images and deleted other images," said Fairey, who has been involved in countersuits with the AP, which has alleged copyright infringement. "I sincerely apologize for my lapse in judgment, and I take full responsibility for my actions, which were mine alone."

He said he was taking steps to correct the information and regretted that he didn't come forward sooner.

Fairey, 39, had claimed he based his "HOPE" drawing on a photo of then-Sen. Obama seated next to actor George Clooney. The photo was taken in April 2006 by Mannie Garcia, on assignment for the AP, at the National Press Club in Washington.

Fairey now says he started with a solo photograph of Mr. Obama - taken at the same event, by the same photographer - a picture seemingly closer to the iconic red, white and blue image of Obama, underlined with the caption HOPE. The AP has long maintained that Fairey used the solo shot.

Attorneys for Fairey have withdrawn and, in papers filed Friday in federal court in Manhattan, stated that he misled them. They also amended the original court documents, reflecting that Fairey used a different picture.

"Mr. Fairey was apparently mistaken about the photograph he used when his original complaint for declaratory relief was filed on February 9, 2009," the papers say. "After the original complaint was filed, Mr. Fairey realized his mistake. Instead of acknowledging that mistake, Mr. Fairey attempted to delete the electronic files he had used in creating the illustration at issue. He also created, and delivered to his counsel for production, new documents to make it appear as though he had used the Clooney photograph as his reference."

Fairey sued the not-for-profit news cooperative in February, arguing that he didn't violate copyright law because he dramatically changed the image. The AP countersued in March, saying the uncredited, uncompensated use of an AP photo violated copyright laws and signaled a threat to journalism.

Fairey's attorneys, led by Anthony Falzone, executive director of the Fair Use Project at Stanford University, have informed the AP that they are withdrawing.

It was unclear whether Fairey would continue with his case. Although he said he was "very sorry to have hurt and disappointed colleagues, friends, and family," he added that the real issue was "the right to fair use" so artists can create freely.

"Regardless of which of the two images was used," he said, "the fair use issue should be the same."

A person close to Fairey said that the artist would continue. The person was not authorized to discuss the case and spoke on condition of anonymity.

The dispute between Fairey and the AP has led to a strong debate between artists and free speech advocates defending Fairey and photographers and journalism organizations citing the need for copyright protection.

In a statement issued Friday, AP vice president and general counsel Srinandan R. Kasi said Fairey's admission struck "at the heart" of Fairey's defense that he was protected by "fair use."

"Shepard Fairey has now been forced to admit that he sued the AP under false pretenses by lying about which AP photograph he used to make the Hope and Progress posters," Kasi said. "Mr. Fairey has also now admitted to the AP that he fabricated and attempted to destroy other evidence in an effort to bolster his fair use case and cover up his previous lies and omissions."

Kasi said the AP would continue to "vigorously pursue its countersuit alleging that Fairey willfully infringed the AP's copyright in the close-up photo of then-Sen. Obama."

The AP plans to donate any proceeds received for past use of the photo to the AP Emergency Relief Fund, which assists staffers and their families around the world who are victims of natural disasters and conflicts.

The "Hope" image has appeared on countless posters, stickers and buttons. It has appeared in several books and in numerous museums, including a mixed-media stenciled collage version added to the permanent collection of the National Portrait Gallery in Washington.

Fairey also used the AP photograph for an image designed specially for the Obama inaugural committee, which charged anywhere from $100 for a poster to $500 for a poster signed by the artist.

Fairey has said that he first designed the image in early 2008, after he was encouraged by the Obama campaign to come up with some kind of artwork.

In February 2009, Fairey was arrested when he went to Boston for an event kicking off his solo exhibit at the Institute of Contemporary Art, among the most popular in the museum's more than 70-year history.

He faced dozens of vandalism charges, but nearly all were dropped. He pleaded guilty to three misdemeanor charges last summer and was sentenced to two years probation.
By AP National Writer Hillel Italie