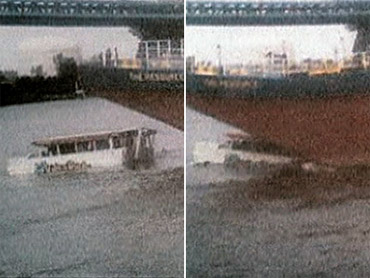 Hope faded for finding two tour boat passengers alive Thursday, a day after the amphibious craft they were riding in was struck and sunk by a barge in the Delaware River, spilling them and other passengers into the murky waters, searchers said.

A search for the missing duck boat passengers resumed in the morning near Philadelphia's Penn's Landing, with boats searching the surface and using sonar, but conditions were too dangerous to send divers underwater Thursday.

Interviews with other passengers indicated the missing 16-year-old girl and 20-year-old man were members of a Hungarian tour group, officials said.

The Hungarian government says the two missing tour boat passengers were part of a group of 15 from that country who had traveled to Philadelphia to take part in a language course.

The Foreign Ministry said Thursday that the group left Hungary on July 2 and was due to return July 23. Consular official Agnes Klekot says the group included 13 students and two teachers from a high school in the western Hungarian city of Mosonmagyarovar.

She says three Hungarians were taken to a hospital with minor injuries, and were treated and released. Klekot declined to release the identities of the missing students, citing Hungarian law.

"We're still searching with some hope," Coast Guard Capt. Todd Gatlin said Thursday at a news conference. "Hopes are fading - but with some hope that they've survived. They could be in the boat, they could be other places."

Most of the victims were tourists taking part in a "duck tour," a popular sightseeing activity in cities across the country, reports CBS News correspondent Elaine Quijano.

While crews searched for the missing, the tour company, Norcross, Ga.-based Ride the Ducks, said Thursday that it was suspending operations nationwide, a day after it suspended its Philadelphia tours. It also operates tours in San Francisco, Seattle, Atlanta, Newport, Ky., and Branson, Mo.

"Our thoughts and prayers are with our Philadelphia tour guests, crew members and their families," the company said in a statement on its website. "We are attending to their needs first. In the interim, we have voluntarily suspended our Ride The Ducks operations nationwide.

Visibility at the bottom of the Delaware River, where the boat was lying in about 50 feet of water, was nil, said Philadelphia police Lt. Andrew Napoli, speaking of his earlier dives.

"The vehicle is laying upright on its wheels," he said. "There could be bodies inside, we're not sure. ... With the currents being what they are, if it went down with bodies inside, the bodies could very well have been washed out of the vessel."

The 37 people aboard the six-wheeled duck boat were tossed overboard when the tugboat-pushed barge hit it after it had been adrift for a few minutes with its engine stalled, police said. Most were plucked from the river by other vessels in a frantic rescue operation that happened in full view of Penn's Landing, just south of the massive Ben Franklin Bridge connecting Philadelphia to New Jersey.

The duck boat, which can travel seamlessly on land and water, had driven into the river Wednesday afternoon and suffered a mechanical problem and a small fire, officials said. It was struck about 10 minutes later by a barge used to transport sludge.

The National Transportation Safety Board said it planned to try to obtain any radio recordings, any possible mayday calls, photographs from witnesses or people aboard and other evidence as its investigators remain in Philadelphia over the next several days.

Investigators planned to try to figure out why the vessels collided and "how conspicuous would that duck have been" to the tugboat pushing the 250-foot-long barge, NTSB member Robert Sumwalt said. NTSB officials also hoped to conduct witness interviews, he said.

One passenger, Kevin Grace, 50, of St. Louis, said he had less than a minute to get a lifejacket on his 9-year-old daughter before the barge hit.

"We had 45 seconds to try to get the life jackets on our kids," he told The Philadelphia Inquirer newspaper. "Everyone panicked, rushing to the front of the boat."

Bystanders along the waterfront screamed as the barge hit the boat, said a security guard who was patrolling the area.

"I whirled around as the barge began to run over the duck boat," said Larry Waxmunski, a guard for the Delaware River Waterfront Corp. "After the barge hit it - it almost looked like slow motion - the duck boat began to turn over."

Television footage showed at least five people being pulled from the water wearing life vests in an area of the river near the Old City neighborhood, popular with tourists. Helicopter footage showed people in life vests being helped from boats onto a dock and at least one person on a gurney.

Terri Ronna, 45, of Oakland, N.J., said she was on a ferry going from Camden, N.J., across the river to Philadelphia when the captain announced that there was someone overboard from another ship and that they were going to rescue him.

"We were not even halfway over when they said there was somebody overboard and we were going to get them," Ronna said.

The passengers who were treated for minor injuries and released from the hospital were three teenagers, three younger children and two adults, Cannon said.

One crew member from the duck boat was rescued by the ferry that the Delaware River Port Authority was operating on its scheduled route between Philadelphia and Camden, authority spokesman Ed Kasuba said.

Officials said the barge was owned by the city and being directed by a tugboat owned by K-Sea Transportation Partners, of East Brunswick, N.J.

The city Water Department uses the barge to transport sludge from a sewage plant in northeast Philadelphia to a recycling plant downriver, mayoral spokeswoman Maura Kennedy said. The city has a contract with K-Sea, which operates the tugboat that pulled the unmanned and unpowered barge.

Holden, of the Coast Guard, said the duck boats are inspected annually, but he did not know when the boat involved in Wednesday's crash was last inspected.

Another Coast Guard spokesman, Thomas Peck, said neither craft was in a wrong lane.

Some of the duck boats are amphibious military personnel carriers dating to World War II that have been restored and reconditioned. Known by their original military acronym as DUKWs, they were first introduced in the tourism market in 1946 in the Wisconsin Dells, where about 120 of the vessels now operate.

As of 2000, there were more than 250 refurbished amphibious vehicles in service nationwide, the NTSB said.