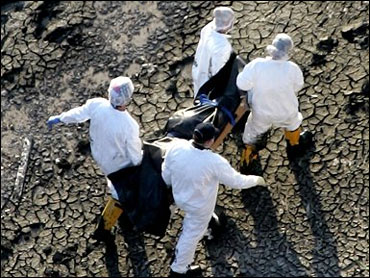 Authorities said Friday that their first systematic sweep of the city found far fewer bodies than expected, suggesting that Hurricane Katrina's death toll may not be the catastrophic 10,000 feared.

"I think there's some encouragement in what we've found in the initial sweeps that some of the catastrophic deaths that some people predicted may not have occurred," said Terry Ebbert, New Orleans' homeland security chief.

Ebbert declined to give a new estimate of the dead.

Also Friday, the embattled head of the Federal Emergency Management Agency, Michael Brown, was replaced as the leader of the recovery and relief efforts by the Coast Guard Vice Admiral Thad Allen. Brown remains chief of FEMA.

Authorities turned their attention to counting the dead in a grid-by-grid search of the city after spending days cajoling, persuading and all but strong-arming the living into leaving the swamped city because of the danger of fires and disease from the filthy, corpse-laden floodwaters.

"Numbers so far are relatively minor as compared to the dire projections of 10,000," Ebbert said.

Mayor Ray Nagin suggested last weekend that the death toll could climb that high, and authorities began bringing in 25,000 body bags as they started gathering up the dead across a landscape awash in corpses.

"This exercise will be done with dignity. You can imagine sitting in Houston and watching somebody removed from your parents' property," Ebbert said. "We don't think that's proper."

Thousands of Hurricane Katrina evacuees will not get those $2,000 debit cards that are being distributed by FEMA. An agency officials says the cards will only be available to those that are temporarily staying at the Astrodome in Houston.

Meanwhile, at the Astrodome, there were long lines for a second day of evacuees hoping to get those debit cards, reports KCBS-AM's Doug Sovern. The process Friday was a little less chaotic, but there was still impatience and frustration.

"Some areas where the water is it's just black. And it's not just dirty, it's toxic," said Dr. James Moises of Tulane Hospital.

The task of collecting rotting corpses and clearing debris is likely to take months. Among the challenges now is how to identify bodies that may be bloated and decayed beyond recognition.

At two collection sites, federal mortuary teams were collecting information that may help identify the bodies, such as where they were found. Personal effects were also being logged.

At the temporary morgue set up in nearby St. Gabriel, where 67 bodies had been collected by Thursday, the remains were being photographed and forensic workers hope to use dental X-rays, fingerprints and DNA to identify them.

Dr. Bryan Patucci, coroner of St. Bernard Parish, said it may be impossible to identify all the victims until authorities compile a final list of missing people.

Decaying corpses in the floodwaters could pose problems for engineers who are desperately trying to pump the city dry. While 37 of the 174 pumps in the New Orleans area were working and 17 portable pumps were in place Thursday, officials said the mammoth undertaking could be complicated by corpses getting clogged in the pumps.

"It's got a huge focus of our attention right now," said John Rickey of the Army Corps of Engineers. "Those remains are people's loved ones."

Some 400,000 homes in the city were also still without power, with no immediate prospect of getting it back. And fires continued to be a problem. At least 11 blazes burned across the city Thursday, including at historically black Dillard University where three buildings were destroyed.