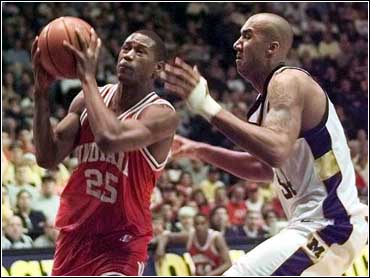 The Hoosiers clearly were paying attention.

Strong first-half shooting by Kirk Haston and Michael Lewis, coupled with tight defense, helped No. 10 Indiana cruise to an 86-65 win over the Wolverines on Sunday.

"It was absolutely imperative that we get started out well," Knight said.

"Kirk Haston is as good a post player as anyone in the league, and they play off him," Michigan coach Brian Ellerbe said.

The Hoosiers, coming off a 77-75 loss at Minnesota on Feb. 9, kept their hopes alive for at least a share of the Big Ten regular season championship. They can assure themselves at least a tie for the title by winning their last five games.

"I think we lost a big game Wednesday night," Knight said. "I thought these were two games we had to win to set up the last part of our season.

"I think this was our most important game all year because it gives us a chance to play (for the title)."

With filmmaker Spike Lee sitting behind the Michigan bench in a maize and blue T-shirt, freshman LaVell Blanchard scored 23 points and Chris Young had a career-high 12 for the Wolverines (12-9, 3-7). But the Wolverines turned the ball over 18 times on the way to their sixth straight defeat.

"We made some mental mistakes at the very beginning," Blanchard said. "But coach settled us down for a little while."

Michigan freshman Kevin Gaine, playing without backcourt mate Jamal Crawford, was held scoreless on 0-for-15 shooting. Gaines had been averaging 12.2 points per game.

Crawford, the Wolverines' leading scorer, was suspended for six games by the NCAA because of his living arrangements while in high school. He will miss two more games before he can return Feb. 24 against Purdue.

"We've got a little bit of the season left," Blanchard said. "It's rough to go through a stretch like this. But all we can do is go out and play as hard as we can."

The Hoosiers, who beat Michigan by 35 points in Bloomington on Jan. 25, took charge right from the start of this game.

With baskets by Jeffrey Newton, Lewis and Dane Fife, plus a pair of free throws by Haston, the Hoosiers broke to an 8-0 lead and never trailed.

"We played against a very good basketball team and I think our team got a little bit frustrated," Ellerbe said. "We weren't very patient and the start was disheartening."

Successive baskets by Brandon Smith helped Michigan cut the deficit to 20-15 midway through the half. But a jumper in the paint by Fife, followed by two baskets by Lynn Washington, helped the Hoosiers respond with an 11-2 run for a 26-17 lead with 8:04 left in the half.

Two free throws by Guyton gave Indiana its biggest lead of the half, 42-25, with just under a minute left in the half. Blanchard had a three-point play with 35.6 remaining and the Hoosiers led 44-28 at halftime.

The Wolverines chipped away behind the shooting of Blanchard and Young in the second half. Two free throws by Young capped a 9-3 burst that closed the gap to 62-48 with 9:22 left.

Six straight points by Washington gave the Hoosiers another 20-point lead, 72-52, with 5:22 remaining and both teams began substituting.