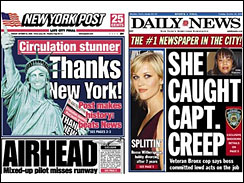 (NYP/NYDN)
There hasn't been a ton of great news for the newspaper industry, well, since the late eighties, and the latest circulation numbers were no exception. Overall circulation was down almost 3 percent from the same period in 2005. There was a glimmer of hope for the New York tabloids, however. The Washington Post explained today that "the New York Post's circulation was up 5 percent, while the Daily News's rose 1 percent."

That's not quite how the Post and the News spun it, however. (See above, courtesy of Gothamist.)

The unending rivalry between the Post and the News has now taken a page from well, their own pages (at least those that mention the mid-term election hoohah.) And yes, they sound exactly like political campaign managers. Number 5 on the Post's "Top Ten Reasons The Post Beat The News"? "We break news – they break promises and don't pay contest winners."

Not to worry, the News hit back. "The Daily News is still New York's Hometown Newspaper - and by a wide margin." Further down, the News quotes its editor in chief and deputy publisher, who "took dead aim at his half-price competitor" with this thoughtful tidbit: "If you'd lost $300 million over the past five years, spent $200 million on new presses, carpet-bombed neighborhoods with free copies and lost fortunes to sell a few thousand papers in Las Vegas and Los Angeles, you'd be desperate to celebrate creeping a few copies ahead of us. The Daily News is STILL unequivocally the No. 1 newspaper in the place that counts - New York."

Perhaps this kind of mud-slinging will have the same effect for tabloids that it has had on voter turnout.