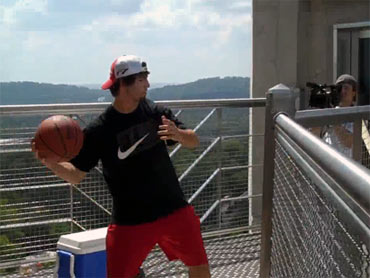 Thanks to YouTube, the Texas A&M students known as "Dude Perfect" are well known for making amazing basketball shots - including one from the third deck of the school's football stadium and even one from a crop dusting airplane.

But now they seem to have some even younger competition in the name of Evan Sellers. The 17-year-old, a member of the group "The Legendary Shots," managed to nail a shot from the top of Birmingham, Alabama's Vulcan monument - some 134 feet high:

Now there's a debate over which hoops crew actually made the longest shot.

The Legendary Shots are calling their basket the "World's Farthest" shot while Dude Perfect has labeled their football stadium heave the "World's Longest."

After a series of brain injuries that forced him into retirement, former tight end Ben Utecht has struggled with the reality of his dramatic and progressive memory loss