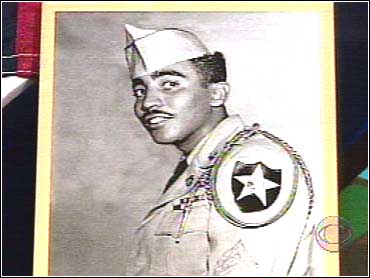 It was a war that many of them quickly admit they tried to forget. They were black American soldiers from a segregated society fighting in Korea for their country in a segregated army.

They were members of the 503rd Battalion, an all-black artillery unit. And in part two of his report on Forgotten Heroes of America's Pacific Wars, CBS News Correspondent Eric Engberg says they had good reason for not wanting to hold on to some of their war memories.

Many had spent years in POW camps. Others had been wounded. All had seen buddies killed in the Chinese surprise attack that forced the U.S. Army into its longest retreat ever.

Donald Minter, who was in the group, spent three years in a Chinese prison. "The food was poor, the cold unbearable."

And they had to look out for each other, Minter recalls. "A lot of the fellas had frozen extremities—fingers, toes and so forth. And there were times we had to work on them and pull those toes and fingers off."

On top of the physical deprivation, the men of the 503rd faced an added tormenter. The Chinese, segregating POW’s by race, singled out blacks for special propaganda appeals, thinking they were vulnerable.

Minter says their Chinese captors would attempt to demoralize them with talk of American imperialism, the capitalist system in the U.S., and the fact that they had to live in a segregated society at home.

And he says the Chinese were good at the way they presented their propaganda. But neither Minter, who went on to become a successful businessman, nor his buddies were interested in any aspect of communism.

They were interested in surviving. And to do that they paid particular attention to the culinary qualities of the local wildlife.

"They would set traps and catch these big field rats. And we would cook those," Minter recalls.

Another member of the 503rd, caught in a vehicle column that was trapped and shot up, was a kid from New York-- Corporal Charles Rangel. "It’s a miracle I'm alive."

Today he is Congressman Rangel, one of the senior Democrats in the U.S. House and a political powerhouse.

But in the Korean War he was wounded at the Battle of Kunu-Ri. He remembers praying as men died all around him in the cold.

"Since Kunu Ri—and I mean it with all my heart, I have never, never had a bad day."

Paying a price in blood, the black troops who fought in Korea wrote a brave page in the nation’s history. Those who made it back still faced a segregated America in the '50s, and many would join another battle—the fight for racial justice at home.

Surviving members of the 503rd returned to Korea last June for commemorative ceremonies. They were able to reminisce about the fact that it was their war that brought an end to segregation in the U.S. military.