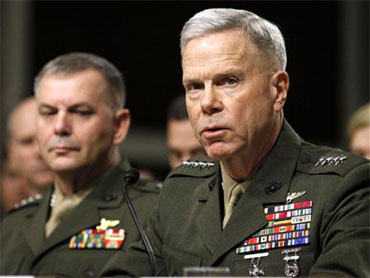 SAN DIEGO - The top leader of the Marine Corps said Tuesday that he wants the first black members of the Marines to be awarded the Congressional Gold Medal and hopes their story will inspire more black men and women to join the Corps and rise through its ranks.

Commandant Gen. James Amos told hundreds of Marine Corps officers at the National Naval Officers Association meeting that it was time for Congress to honor the group known as the Montford Point Marines.

About 20,000 black Marines underwent basic training in the 1940s after President Franklin D. Roosevelt integrated the Marine Corps. They were trained at the segregated Camp Montford Point in Jacksonville, North Carolina, as racism continued in the Marine Corps and society.

Marines get a female commander at Parris Island

The black troops were not allowed to enter the main base of nearby Camp Lejeune unless accompanied by a white Marine.

By 1945, many of the black recruits had become drill instructors and non-commissioned officers at Montford Point. The segregated camp was closed down in 1949 and black recruits were sent to Parris Island and Camp Pendleton like all new Marines. The Corps was fully integrated during the Korean War.

The Congressional Gold Medal is awarded to a civilian or group of civilians as the highest expression of national appreciation for distinguished achievements and contributions.

Amos said his goal was to cement the role of the Montford Point troops in the Corps' 235-year history. His efforts are part of a broader goal in diversifying the military's smallest branch and sharing the legacy of the black Marines.

The story of the first black recruits will be part of the instruction Marines receive during basic training.

"Spread the gospel that the Marine Corps is a force that has changed," Amos told the officers. "We're not in 1942 anymore."

Amos said only 5 percent of Marine officers are black and that needs to increase, something he pledged to make a priority.

The Marine Corps, like all military branches, had high recruitment and retention rates this year and will be looking to downsize from 202,000 to 186,000.

Amos acknowledged stiff competition to get into the Marine Corps but said that does not take away from efforts to boost minority numbers, especially among officers.

"I'm not out for quotas," Amos said. "I'm out to attract the best young men and women of our nation."

Amos has invited Montford Point Marine veterans, now in their 80s, to stay at the Marine Corps barracks and participate in a parade honoring them in Washington, D.C., on Aug. 26, which the Senate last year designated as "Montford Point Marines Day."