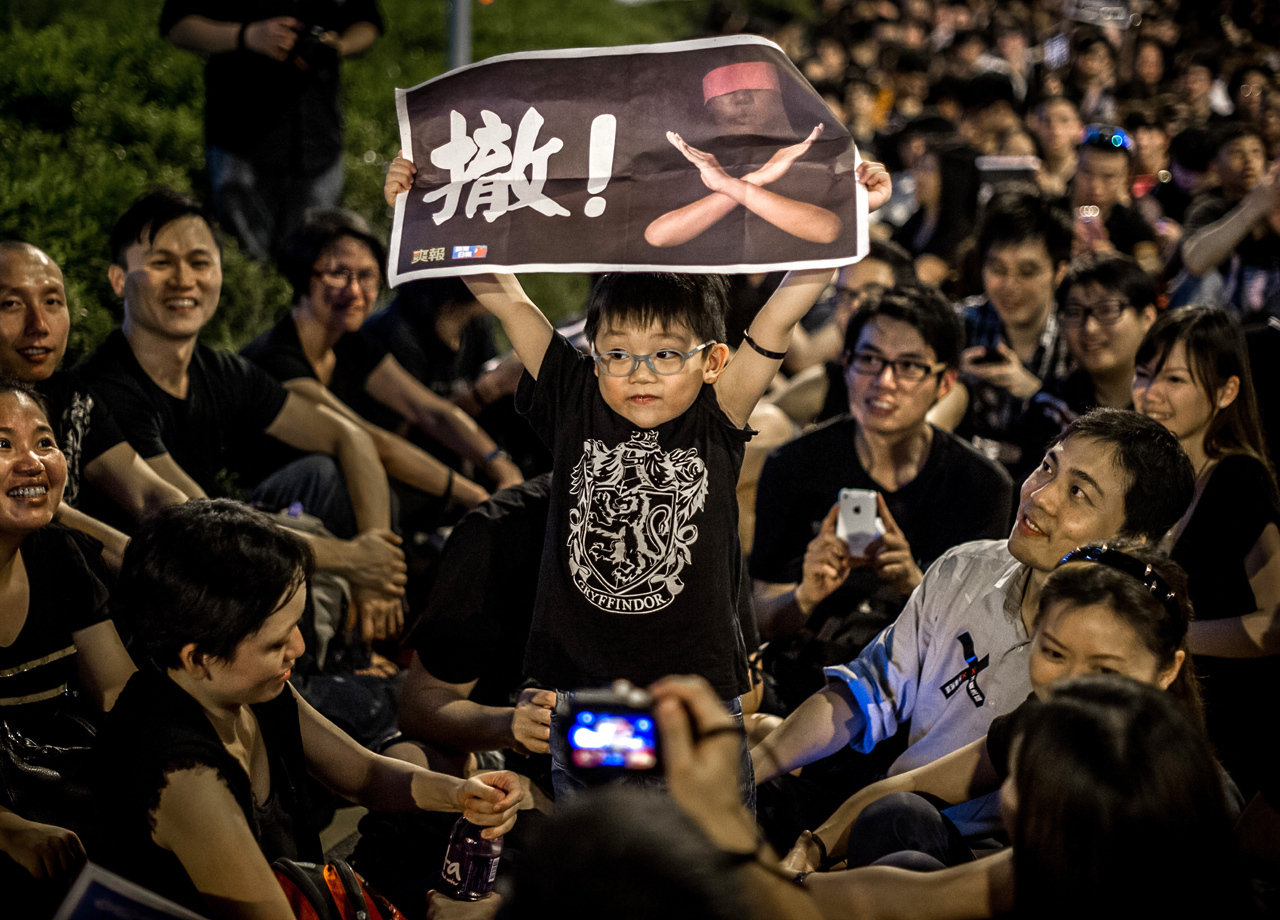 (AP) HONG KONG - The Hong Kong government calls it national education. But parents, teachers and pupils in the former British colony call it "brainwashing" and fear it's a ploy by Beijing authorities to indoctrinate the city's young into unquestioning support of China's Communist Party.

Plans by the government to introduce the classes have triggered mass protests and hunger strikes, the latest sign of the widening gulf between Beijing and the freewheeling semi-independent southern Chinese financial center, 15 years after Britain handed it back to China.

The dispute deepened as classes started this week, with activists including a handful of hunger-strikers camping out in front of Hong Kong government headquarters in a bid to force officials to drop plans to introduce the subject in primary and secondary schools. They've been joined each evening by thousands of protesters wearing black.

A local TV station fanned the flames when it called the activists a "destructive faction" controlled by London and Washington.

The rising tensions forced the city's Beijing-backed leader, Chief Executive Leung Chun-ying, to call off his trip to a high-profile Asia-Pacific summit this weekend in Vladivostok, Russia.

The growing opposition to the new curriculum threatens to undermine the chances of pro-Beijing candidates in elections Sunday for the city's legislature, when for the first time more than half the seats will be chosen by the public. Leung insisted the government had no intention of brainwashing, and reiterated Thursday that a group he set up to listen to public views would consider all options, including dropping the new curriculum entirely. But activists slammed the move as a hedging tactic ahead of the vote.

The protesters are afraid of what they see as underhanded attempts to indoctrinate the city's next generation with Beijing-style nationalist education classes used in schools all over China to inculcate support for the Communist government. Many believe Leung, who became the city's leader in July after being picked by an elite, pro-Beijing committee, has close ties to the Chinese leadership.

"Those who are opposed aren't against becoming more familiar with China, but they are against being made to mindlessly flatter China," said Ben Leung, an 18-year-old secondary school student who has joined the protests with a half-dozen friends for the past few evenings. "We're afraid of this so that's why we need to take this step."

Many Hong Kongers are people who have either fled mainland China in past decades or have relatives who did. Surveys show a shrinking number identify themselves as Chinese citizens. They are increasingly uncomfortable with Beijing's growing influence on the city, its stunted democratic development and an influx of wealthy mainland Chinese that is driving up property prices. Residents take pride in the city's high degree of autonomy, separate legal system and civil liberties not seen in mainland China such as freedom of speech. Hong Kong was allowed to keep them when Britain handed the territory back to China in 1997 after more than a century of colonial rule.

The new curriculum has been on the cards for years but fears rose earlier this year that it could be used for "brainwashing" after a pro-Beijing education group published a pamphlet that extolled the virtues of one-party rule. The government stressed that the booklet, called "The China Model", was not part of designated teaching material.

Senior government officials have repeatedly denied claims that the classes aim to impose a certain mindset.

"The government isn't brainwashing, it doesn't want to brainwash, and it will not brainwash, with this subject," Leung Chun-ying said Thursday.

The government is encouraging schools to begin moral and national education classes this year but is not making it a required subject until 2015. According to curriculum guidelines, students will learn about China's political leaders, the efforts and contributions they have made and the difficulties and challenges they face. They'll also learn how to "speak cautiously," practice self-discipline and get along well with others in a rational and respectful way.

"What worries students, parents and the public at large is that a lot of the material that may be used as national education is seen as attempts to brainwash young minds in Hong Kong," said Willy Lam, a veteran China watcher and professor at the Chinese University of Hong Kong. It's seen as "an attempt by Beijing to impose Chinese values of nationalism patriotism onto Hong Kong so that Hong Kong's high degree of autonomy might be impaired."

In mainland China, "political education" classes are required for students all the way up to university. "A big chunk of it is indoctrination, with at least some kind of crude propaganda about the glory of the nation, the achievements of the Communist party," and reasons why people should follow the party's instructions, said Lam.

The chairman of a pro-Beijing group inflamed the debate further when he suggested that opponents should indeed "wash their brains."

"A brain needs washing if there is a problem, just as clothes need washing if they're dirty and a kidney needs washing if it's sick," said Jiang Yudui, chairman of the Beijing-friendly China Civic Education Promotion Association of Hong Kong, according to news reports. Jiang's comments in July came at the same time that tens of thousands, including many parents pushing their children in strollers, took to the streets to protest against the plan.