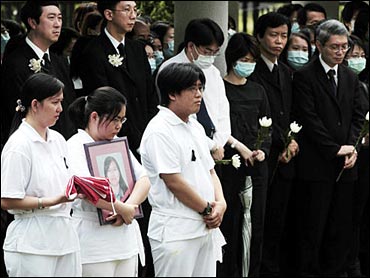 The World Health Organization removed Hong Kong from its list of SARS-infected areas Monday, but warned the territory to keep up its guard against future outbreaks that might put it back on the list.

Hong Kong's great concern is to avoid a repeat of what happened in Toronto, where a new outbreak was discovered after Canada's largest city was taken off the WHO's list. Two people died of SARS on Sunday in Toronto.

Hong Kong Chief Executive Tung Chee-hwa said the territory was "of course happy" about the WHO announcement, but he expressed sadness over nearly 300 deaths from the disease and cautioned, "this could come again."

Hong Kong's removal from the list was expected. Sunday was the 20th day since the last confirmed SARS patient in Hong Kong was put in isolation in a hospital, the condition that qualified the territory to be taken off the list.

Only Beijing, Taiwan and Canada's largest city, Toronto, remain on the list following the ebbing worldwide of the SARS crisis since its peak in March and April. WHO has credited old-fashioned quarantines with breaking the back of the outbreak.

"Hong Kong, with its dense population and fluid border with China, had one of the hardest outbreaks to control. This success means that the whole world can now feel safer from the SARS threat," Dr. David Heymann, chief of communicable diseases at the Geneva-based WHO, said in a statement.

SARS has killed more than 800 people, most of them in Asia, since the disease emerged in southern China last November.

More than 8,400 were sickened in more than two dozen countries before the outbreak was controlled worldwide with officials isolating patients and screening travelers for the SARS symptoms of fever, dry cough and aches.

But in general, celebrations were muted. Top officials reportedly felt that anything elaborate would be inappropriate given the toll the disease has taken on Hong Kong's people and its economy.

Tung marked the occasion by visiting Amoy Gardens, a crowded housing estate where more than 300 people fell sick with SARS before strict quarantines brought an outbreak there under control.

"Every time I think about those who passed away or sacrificed because of SARS I feel a great deal of sorrow," Tung said.

A total of 296 people have died from severe acute respiratory syndrome in Hong Kong, out of 1,755 sickened by the flu-like disease.

The territory was removed from the WHO's list at 0700 GMT, the beginning of the business day in Europe, or 3 p.m. in Hong Kong.

"We advise Hong Kong to look at Toronto and learn the lesson of what can go wrong if you don't maintain your vigilance," WHO spokesman Peter Cordingley told The Associated Press by telephone from the agency's regional headquarters in Manila. "We are absolutely satisfied that Hong Kong is going to do that."

At the height of the outbreak, hundreds of thousands of Hong Kong residents terrified of catching SARS wore surgical masks, avoided crowded public places and virtually stopped dining out or shopping for anything but necessities.

That, coupled with a virtual halt to tourism, devastated the already ailing local economy, pushing unemployment to a record 8.3 percent.

Most Hong Kongers have now given up the masks. On Monday, some schools held "unmasking" events to mark the city's removal from the WHO list.

Still, education authorities were keeping temperature checks for students in place and urging schools to continue swabbing down with bleach.

Many public buildings installed dispensers of anti-bacterial spray for hands, and hand-washing facilities in many public toilets have been improved - part of a public health drive aimed at preventing the spread of SARS.

The government was expected to announce later Monday new measures to boost tourism. Officials have already embarked on a massive cleanup campaign for the city's grimy streets and have announced measures to create more jobs for the growing ranks of unemployed.

Cordingley said that although there is a risk SARS might recur here, for now Hong Kong is safe. He praised the local efforts to combat SARS, which first hit here in late February.

"Hong Kong has suffered in a way that nowhere else has. The disease was in the hospitals and in the community almost before we knew what it was," he said. "But we take our hats off to the effort that the Department of Health has made in Hong Kong."