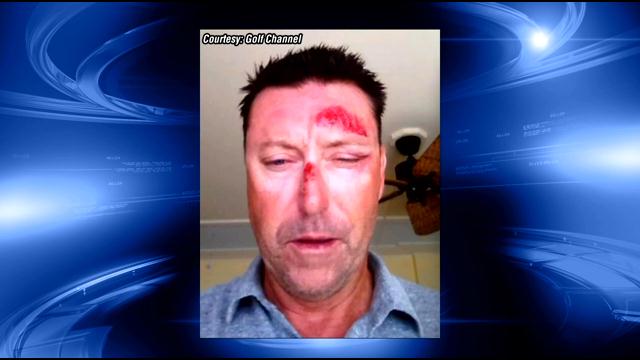 HONOLULU - A homeless woman who helped a professional golfer who claims he was kidnapped, beaten and robbed in Honolulu says she found the pro-athlete bloodied on a street corner just steps from the wine bar where he had dinner the night prior - and not six miles away in a park like he initially told reporters.

Australian golfer Robert Allenby said he doesn't remember what happened after he had dinner at a wine bar on Friday night after missing the cut in the Sony Open.

He said he has no recollection of what happened until he awoke in a park, 6.5 miles away from the bar, without his wallet, identification or cell phone and was being kicked and prodded by homeless people.

According to CBS affiliate KGMB, Allenby told reporters that Charade Keane, a homeless woman, told him she saw some men throw him out of a car trunk, but Keane denies seeing that.

"I can't say somebody did something I didn't see them do," Keane told KGMB. "I can't even tell you how he got hurt. I just know that he was bleeding everywhere."

Keane told the station she found Allenby sitting on a planter at a street corner - just steps away from the wine bar - with a bloodied face early Saturday. She said Allenby was arguing with two homeless men she knows.

"He was saying that they knew something about what happened to him and they were saying that [they] just saw him fall and hit a rock and it was kind of weird because I didn't know what happened," Keane told the station.

As she and Allenby walked away, he said all his belongings were gone and he asked her to negotiate with the two homeless men, who he thought were robbers.

"He asked me to tell them that he would give them $500 to get his wallet and his phone back, because it turned out he had one credit card left and he wasn't sure why and that's when we thought maybe they wanted more money," Keane said. "And when I asked them, they said they didn't have the things, but still wanted him to give them money, so I told Mr. Allenby that and that's when I was kind of worried, but that's when the other boy came up."

That other boy - a young man in the military - helped Allenby and paid for a taxi to get him back to his hotel, Keane recalled.

Allenby didn't call police until he was back at his hotel. He told the media he didn't want to call police at the scene because he didn't feel safe there.

According to KGMB, law enforcement sources say Allenby's injuries do not appear to be consistent with an assault, but instead look more like scrapes that he could have suffered in a fall.

Honolulu police have said they are investigating the case as a second-degree robbery.