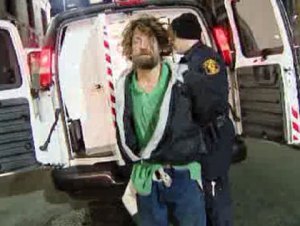 (CBS/AP) PITTSBURGH - A homeless man had quite an upgrade this week.

He was found sleeping in one of Pittsburgh's ritziest hotels, the Omni William Penn downtown.

In the Presidential suite.

But by Tuesday night, 48-year-old Jeffrey Watson was taken away to jail.

Hotel guests were checking into the suite about 7:30 p.m. when they saw Watson sleeping on a couch and notified hotel staff, police said. Hotel security officers woke him up, took him to their office and called police.

Hotel general manager Eric DeStefano issued a statement on the incident, saying the parlor area of the Presidential suite is "a general-use area for receptions and small events. The door had been programmed to remain unlocked for an event earlier that day. As soon as the occupant was discovered, he was escorted off the property," DeStefano said.

Watson told police "he has been in Pittsburgh for over a month and sleeps wherever he can locate somewhere comfortable to rest his head," police spokeswoman Diane Richard said.

According to the hotel's website, as reported by CBS Pittsburgh, the presidential suite has a 1,300-square-foot parlor, three connecting bedrooms, crystal chandeliers and a grand piano, in addition to other features.

Richard said police don't know how long Watson had been in the suite.

After Watson was taken from the room, two Pittsburgh police officers escorted him into the back of a police van.

They took him to the Allegheny County Jail, where he remained Wednesday unable to post $15,000 bond. He faces a preliminary hearing Nov. 19 on charges of criminal trespass and theft of services, according to online court records.