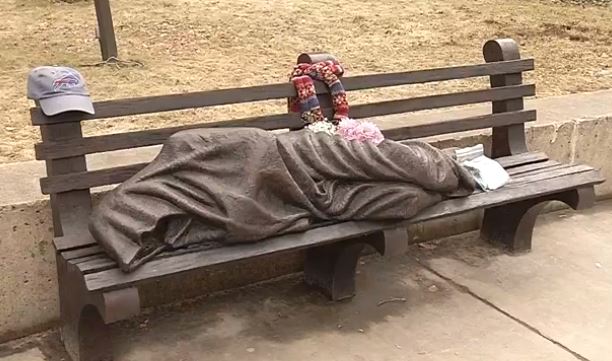 BUFFALO, N.Y. - The unveiling of a statue depicting a homeless Jesus sleeping on a park bench in downtown Buffalo has led people to leave money, food and other items at the bronze sculpture.

The statue was unveiled last week outside St. Paul's Episcopal Cathedral, which raised money for the public art project through private donations. The work by Canadian sculptor Timothy Schmalz shows a blanket-shrouded Jesus, identifiable only by the crucifixion wounds on his feet.

CBS affiliate WIVB-TV in Buffalo reports that soon after its unveiling Tuesday, offerings apparently meant for Buffalo's homeless began showing up on the statue.

Church members and clergy say the items have included money, food, books, a Buffalo Bills cap and a scarf. The church collects the items each day and donates them to a local organization that helps the homeless.

The Very Reverend Will Mebane told WIVB: "It's just amazing what's all been collected. It's the wildest thing. Never imagined it would happen."