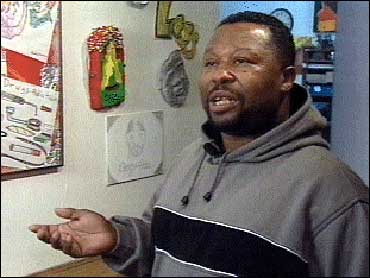 Richard Crowner used to walk the streets of Baltimore with no place to live. He passed the time by using drugs.

That is, until he showed up at a clinic run by Health Care For The Homeless. There, he found the treatment for his addiction came through art – something he nurtured as a child.

"These things right here are some of the things I used to do,” he said, pointing to drug-related artwork. “Drugs can make you homeless and messing with this stuff can lead you quickly to death."

That’s a fate Crowner has avoided, thanks to his participation in the agency’s art program. Now his art is part of an exhibit called “Art About Our Streets.” By highlighting the artists’ talents, the exhibit also brings to light the mental, physical and social problems that go hand-in-hand with homelessness.

"This is a gentler way of entering the medical program and getting the social services they need,” said Chris Beilenson of Health Care For The Homeless

The need is especially critical for the black community. Forty percent of the nation’s homeless population is black. And in cities like Baltimore, affordable housing is a rare commodity.

"Its very difficult to find,” Beilenson said, “and we're always trying to guide people in that direction but if we had enough resources we could do it faster and better."

Crowner will be waiting 18 months for permanent housing. But at least now, he’s moving in the right direction.

"I got my I.D. back.. my birth certificate back,” he said. “All that I needed in life I got it back through the program."

He’s also has his love for art.

By Andre Showell and Bob Bicknell

Newark scales back on reopening as coronavirus cases rise

Newark, New Jersey is reversing course on reopening as cases rise around the city.