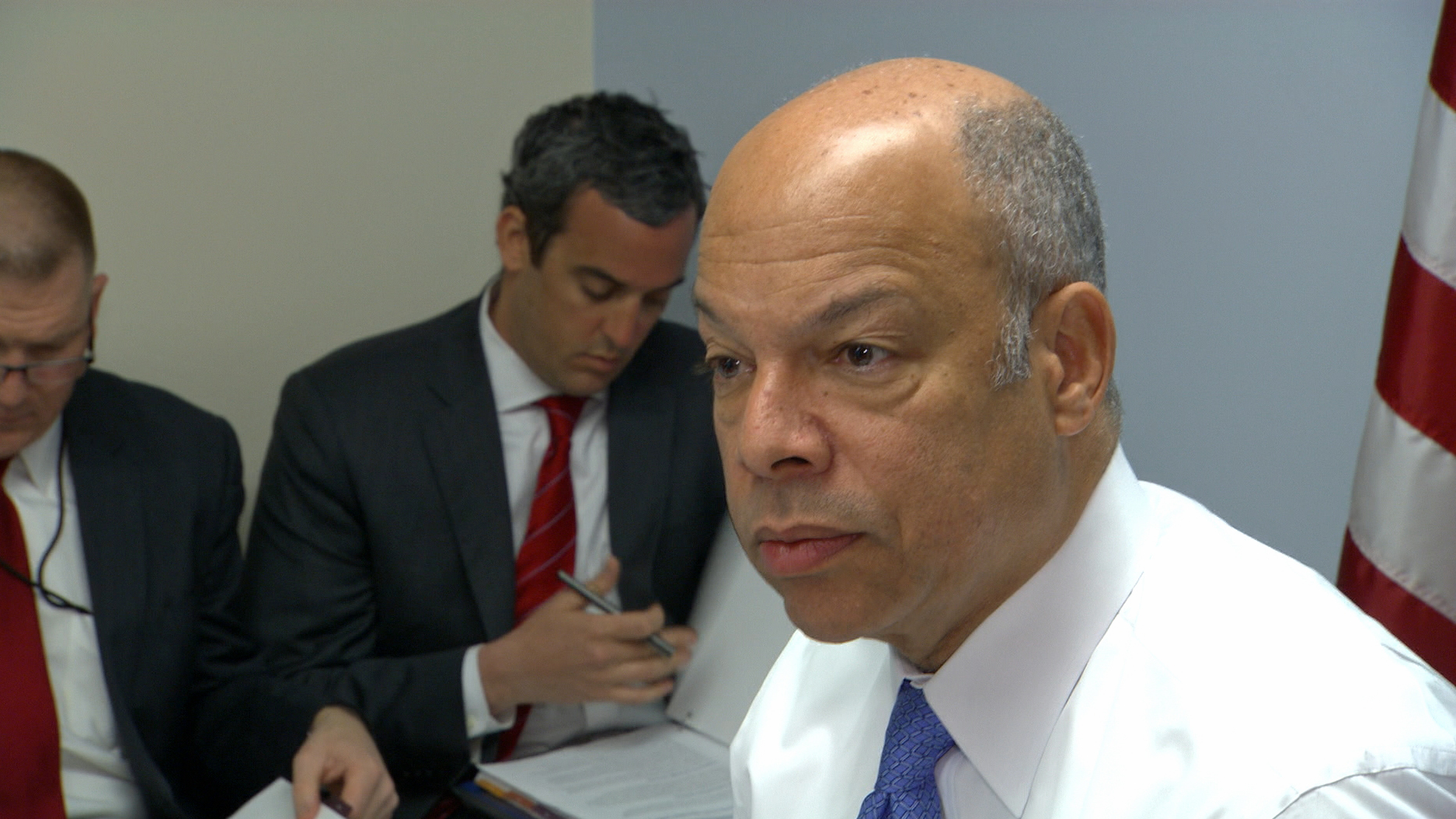 The following is a script from "Homeland Security" which aired on April 5, 2015. Lesley Stahl is the correspondent. Rich Bonin, producer.

The man running the Department of Homeland Security, Jeh Johnson, has a lot on his shoulders, protecting the country from another terrorist attack -- especially now with the rise of homegrown terrorism. Just this past week two women -- both Americans and both allegedly inspired by jihadist propaganda -- were arrested and charged with planning to detonate a bomb in the United States.

The Department of Homeland Security is a collection of federal agencies including TSA's airport security, border control and cargo inspection that have long been charged with stopping terrorists from abroad, slipping into the country. Now, Jeh Johnson is scrambling to adapt to the new threat of lone wolves that he admits is more difficult to detect and stop.

Before coming to Homeland Security, Johnson served as the general counsel of the Defense Department, where he was a legal architect of the Obama administration's use of lethal drone strikes. There, at the Pentagon, he was on offense -- taking the fight to the enemy. Now, at Homeland Security, he is on defense, trying to prevent another terrorist attack from happening here on the streets of America.

Lesley Stahl: The FBI says it has a homegrown, extremist investigations going on in every single state. How serious, how serious is this threat? Is it hair on fire? Every state...

Jeh Johnson: I certainly don't believe in the hair on fire phenomenon.

Lesley Stahl: But every state, I mean, that means it's percolating everywhere.

Jeh Johnson: The fact that we have investigations in every state does not surprise me. We are very concerned about young people romanticizing a group like ISIL. And so we've gotta keep tabs on it all.

Lesley Stahl: This kid is sitting in his basement or her basement and reading the web, and being radicalized. How on earth can you keep a tab on that person?

Jeh Johnson: That's the challenge isn't it? And that's one of the things that frankly, keeps me up at night. Because we would have little or no notice if somebody decides to commit an act of violence. So if the family member, the religious leader, the teacher trusts us enough to inform us, we're in a position to make a difference.

The Department of Homeland Security wants you -- the public -- to call in. It's part of a new push to deal with the lone wolf threat with Johnson himself reaching out to build trust with local leaders...

[Jeh Johnson: Jeh Johnson, how are you? Nice to see you.]

And he's shifting the department's resources to cops on the beat, as the war on terrorism has evolved.

[Jeh Johnson: How are you?]

That's why DHS has funded 78 fusion centers around the country - like this one in Phoenix, set up for the Super Bowl -- to get all levels of law enforcement, down to the county sheriff, to work together.

Official: We're connected through that command and control system -- federal, tribal, state, county, local, even political subdivisions. So we have the ability to reach out in real time and coordinate information, public information or intelligence.

Any information about suspicious activity, whether FBI intelligence in Washington or something somebody sees on the streets of Phoenix -- is all shared right in this room.

Johnson's department has never been more central to the war on terror. But it has come under almost constant criticism for, over the years, weak management and low morale...and recently a Senate oversight committee went after the quality of its intelligence.

Lesley Stahl: This report is current. It was a 2015 study of the department. It says that intelligence is stale.

Jeh Johnson: Well, I'd have to disagree with that. Every morning, when I read intelligence it's real time. It's valuable.

Lesley Stahl: It said that the department's primary counterterrorism programs are yielding quote "little value for the nation's counter-terrorism efforts."

Jeh Johnson: It also said that we're moving in the right direction.

To be fair, Johnson has been on the job for only 14 months. He was brought in to fix all the problems that have long hobbled the department.

Lesley Stahl: When you took the job, people said it was the worst job in Washington. You walked right into it.

Jeh Johnson: As they say in the place I used to work, the Pentagon, it's an opportunity to excel.

And so far he's gotten high marks, even from the Republicans in Congress.

When he came on board, nearly half the senior management jobs were vacant; he's filled all but one; he's boosted morale; and improved the coordination and dissemination of threat information throughout the government, which is done here at the national operations center where planes flying over the country and ships sailing off the coasts are monitored 24-7.

Lesley Stahl: Can you quantify how much success you have had?

Jeh Johnson: Almost daily. Certainly weekly somebody's not allowed to get on an airplane or somebody is arrested and charged with material support to terrorism.

Johnson starts his day before the sun comes up, when a Secret Service detail drops him off at his office at 6:15. His first task, reviewing the top-secret daily brief on the latest threats against the United States, including information on people who've answered the call to fight for ISIS.

Lesley Stahl: As I understand it, of the 180 Americans who have gone overseas to fight in Iraq and Syria, 40 have come back. I assume you're keeping close tabs on those 40?

Jeh Johnson: We have in fact kept close tabs on those who we believe have left and those who've come back. A number have been arrested or investigated and we have systems in place to track these individuals. But you can't know everything.

More than 3,000 Europeans have gone to Iraq and Syria to fight with ISIS. One reason so few young people from the United States have gone, he says is geography.

Jeh Johnson: We are separated from the hot spots by an ocean, which does make it more difficult.

Lesley Stahl: So do you think if it were easier for these kids to get there, there would be more of them going?

Jeh Johnson: Probably. And so border security is not simply preventing people from getting in, but very often preventing somebody from leaving for the wrong reasons.

The homegrown movement - with its Internet recruiting videos -- was largely inspired by this man, an American turned terrorist in Yemen, named Anwar al-Awlaki. He was killed by a drone strike like this one, one of many Johnson green-lighted when he was general counsel at the Pentagon.

Jeh Johnson: If it was a strike off what we call the hot battlefield -- in other words, outside of Iraq and Afghanistan -- by the military then I would have to give the legal sign-off first. And so I did that.

Lesley Stahl: At one point, you had to decide whether it was OK to kill an American, al-Awlaki.

Jeh Johnson: In any use of targeted lethal force, we'd have to conclude that it was consistent with domestic law and international law.

Lesley Stahl: Did you say it was not legal many times?

Jeh Johnson: Occasionally I would have to conclude that the legal authority was not there. And quickly found out that it was actually easier to say yes than it was to say no.

Lesley Stahl: Why was it easier to say yes?

Jeh Johnson: Very often when we're asked to approve the use of targeted lethal force, it can only be in a matter of minutes.

Jeh Johnson: And so there's a lot of momentum to that. So to say no is like stepping in front of a 90-car freight train.

Lesley Stahl: The first time you said yes, you have said that you were very uncomfortable.

Lesley Stahl: What you actually said was, "If I were Catholic, I would have to go to confession."

Lesley Stahl: Did it get easier?

Lesley Stahl: It never got easier?

Lesley Stahl: But there has been so often, collateral, what they call collateral damage, meaning that innocents get killed.

Lesley Stahl: That happens. Does it haunt you?

Jeh Johnson: I don't know if I like the word haunt but we have to be sensitive to the notion that the judgments we make today could be condemned on the pages of history years from now.

We went with Johnson on a cold morning to look out at the tip of Manhattan. He was in New York on 9/11 and witnessed the destruction of the World Trade Center.

Jeh Johnson: It was a moment for me when I realized that our Homeland Security could be shattered in an instant, unexpectedly. And quite dramatically.

Lesley Stahl: Out of this came the Department of Homeland Security.

Jeh Johnson: Out of what happened right here came the Department of Homeland Security.

It's a department that brought under one roof an array of 22 federal agencies, including FEMA, the Secret Service, the Coast Guard.

Jeh Johnson: Then last but not least, you have the lady right here. Citizenship and immigration services.

He oversees a huge bureaucracy with 240,000 employees.

It's a management nightmare because the various agencies have disparate functions, some -- critics say -- with little or nothing to do with terrorism.

Immigration dealt with the waves of unaccompanied children from Central America last summer.

Clark Ervin: This department is a disparate amalgam of things that don't fit together very well.

Lesley Stahl: The threat is more complicated and look what we created to deal with it: the most complicated setup you can imagine. That doesn't make any sense.

Lesley Stahl: Also in this department is the Secret Service.

Lesley Stahl: And they're having terrible problems even just guarding the White House.

Clark Ervin: There are more threats against this president for obvious reasons than any president in history. There's that. Against that backdrop, of course, there is this complicated terrorist threat picture that we've been talking about. There is zero room for error here. And there's been a lot of error.

"Homeland Security means very often something you never hear about. And that's what we do. You don't get a lot of thank yous for that."

Johnson's challenge is to fix a dysfunctional agency at the same time he's dealing with a terrorist threat that's becoming ever more complex and hard to detect.

Lesley Stahl: And you've answered a lot of my questions with, "Well, it's a work in progress."

Jeh Johnson: Because it is a work in progress. Correct. Are we large? Yes, we are very large. Do we have some inefficiencies that need to be eliminated? Absolutely. And I believe we're moving in the right direction in that regard.

Lesley Stahl: But do you think that under your leadership so far that things have moved fast enough?

Johnson realizes he can't fix all that's wrong with the department before he leaves in 2016. But he's confident it is working well enough to do the job. For instance, agencies in his department - TSA and border protection - screen and vet nearly 3 million travelers every day.

Jeh Johnson: The nature of Homeland Security is that no news is good news. And no news sometimes means somebody got interdicted at the border, somebody got interdicted before they could get on an airplane, somebody was arrested providing material support to terrorism. Homeland Security means very often something you never hear about. And that's what we do. You don't get a lot of thank yous for that.